Nice boy but he's got more nerve than a bum tooth 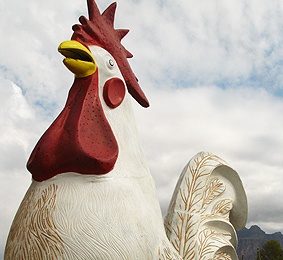 Only in Arizona could there be a story of a rooster statue in the news. The statue sat outside an Apache Junction restaurant, until the city ordered it taken down.
For three days, the giant aluminum fowl was perched atop Hitching Post Pizza and Pub off Arizona 88 approaching the Superstition Mountains. Owner Mehmood Mohiuddin envisioned it as a sort of landmark.

That was until the city made him take it down. On Oct. 12, a city building inspector flanked by two policemen cited Mohiuddin for erecting the statue without a permit. He's now facing a criminal charge that could result in a $2,500 fine, six months in jail and three years' probation.


This is what passes for news in Arizona. At night, they televise high school sports. And people don't belive 2012 is the end of the world. LOOK AT THE SIGNS!


The town is probably in fear that the idol represents a Satanic cult that worships Foghorn Leghorn.

Go, I say go away boy, you bother me 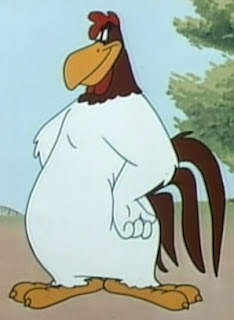