Seven years after the announcement of their creative break, the original members of prog rock supergroup TRANSATLANTIC - Roine Stolt (THE FLOWER KINGS), Pete Trewavas (MARILLION), Neal Morse (ex-SPOCK'S BEARD) and Mike Portnoy (ex-DREAM THEATER) - got together again and recorded a new studio album titled "The Whirlwind", which went on to be TRANSATLANTIC's best-selling album, entering mainstream charts in the U.S., Germany and Netherlands. Their two seminal albums, tours and DVDs redefined prog's artistic and commercial possibilities with a combination of modern and traditional prog, classic pop sensibilities, and mind-blowing musicianship. 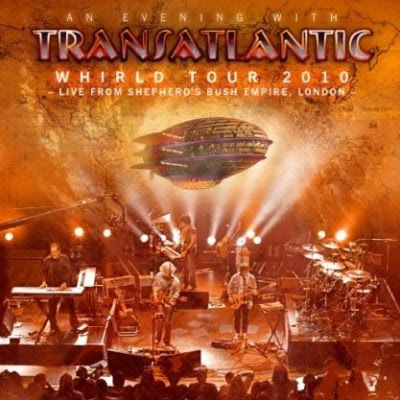 The "An Evening With Transatlantic Whirld Tour 2010" was the group's largest tour, covering both sides of the Atlantic across 11 countries. With the addition of PAIN OF SALVATION's Daniel Gildenlöw on guitar and keyboards, it was also their most musically powerful. On May 21, 2010, at Shepherd's Bush Empire in London, the cameras were rolling.

The upcoming release entitled "Whirld Tour 2010: Live At Shepherd's Bush London" will be available as a 2-DVD PAL-version set, a 3-CD audio version and a 2-DVD and 3-CD deluxe edition. The concert featured the entire "Whirlwind" album performed exactly as on the studio recording. But that's just the beginning. For the next two and half hours, TRANSATLANTIC performed nearly every song they've ever recorded, along with some surprises. The audio recorded at the show was later mixed by the band's own Roine Stolt, ensuring a genuine presentation of the music from that night. The show doesn't end, though, with the fading echoes of the final note. Backstage, in and around cities throughout Europe, the cameras accompanied Mike, Neal, Roine and Pete on their journey. Uncensored experiences and candid moments reveal the good, the bad, and the unexpected of life on the road. Also included is the band's encore from the final night of their tour, a headlining spot at the U.K.'s High Voltage festival. For the last song at High Voltage, they performed the GENESIS classic "Return of the Giant Hogweed", joined onstage by original GENESIS guitarist Steve Hackett.

Track listing for the 2-DVD and 3-CD Deluxe Edition:

All of the Above

We All Need Some Light

Duel With the Devil

Stranger in Your Soul

Return of the Giant Hogweed (with Steve Hacket)