FEAR THE BEARD (PART ONE)

Well, not really fear them.

But here for your reading pleasure, is an article on progressive rock band Spock's Beard originally published in a recent issue of Goldmine magazine (also available on their website, www.goldminemag.gom).

A great article from a great music collector's publication on a great band. How can you lose?

Once upon a time there was a progressive rock band, a truly magical one that was going places. Just as the band peaked with the creation of its masterpiece – a two-disc concept album – the charismatic, all-important frontman quit. But all was not lost; the drummer took over as lead singer, and the band lived happily ever after.


Sound familiar? Probably, but we’re not talking about Genesis here. A home-grown prog band, Los Angeles-based Spock’s Beard, followed the same pattern when singer/composer Neal Morse left the band in 2002 and drummer Nick D’Virgilio added lead vocals to his job duties. Spock’s Beard v2.0 made three CDs since Morse’s departure, but then took a long break. The band recently re-emerged with an excellent CD, X, the first album to be independently financed (with a little help from their friends) and self-released by the band. 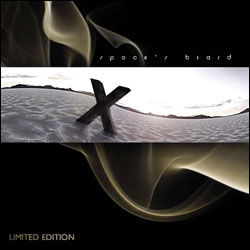 Spock’s Beard has always existed in that sweet spot where Beatlesque melodic rock meets prog. More adventurous than Asia, more melodious than Dream Theater, Spock’s Beard brings a refreshingly American spin to the Brit-originated prog rock format. Sure, they can play in 17/9 time like Yes or ELP; sure, they’re all world-class players on their respective instruments; but like Genesis they’ve always put songwriting first. Their original take on this classic style has earned the band a devoted following, but they haven’t always enjoyed smooth sailing over their 18 years of existence.

Spock’s Beard has weathered its share of storms and is now back, stronger than ever. But theirs has been a long road fraught with twists and turns.

The Spock’s Beard story began in 1992 when aspiring singer/songwriter/multi-instrumentalist Neal Morse asked his guitarist brother Alan to listen to some progressive music he was working on.

“Neal wrote ‘The Light’ (which would become the title suite of their debut album) and he played it for me on his little keyboard, and I went, ‘Oh, nice Zappa ripoff,” Alan Morse recalled. “I thought, ‘Oh, it’s kind of cool,’ so he came over and I played some lead on it in my living room.”

Recording on the album commenced, but it was, in Alan’s words, “pretty much a shoestring operation. … We were doing ADAT tape back then … that was pretty much cutting-edge at the time. It was hilarious when we were mixing that thing. We had all four or five us crowded around the board and each guy was riding his own knobs. … It’s still one of my favorite records. Most of my favorite records were recorded on what would now be considered terrible gear.”

Even if they didn’t need sophisticated equipment, one thing the Morse brothers needed was a band. Fate played a hand in the arrival of their drummer.

“I met Alan and Neal at a bar in L.A., the Universal Bar & Grille,” D’Virgilio remembered. “It was a blues jam. You had to put your name on a chalkboard; they’d call you up periodically … and they called the three of us up. We hacked through some blues. We ended up talking about prog, and how we were all into the same kind of music. They had an organized jam at a rehearsal studio a few days later. Neal was talking about how he had written all this progressive music and had enough for a record, and that ended up being The Light. I went down to Neal’s place and picked up the cassette and dug it and I’ve been with the band ever since.”

With the drummer slot filled, the band needed a bass player. John Ballard, a friend of Neal’s, played bass with the then-nameless band for about a year, but was replaced by Dave Meros.

Fate may have played a part in his joining as well. “Sometimes when you really need something to happen, it does,” Meros said. “I was getting bored with traveling and playing this simple, blues-based stuff. In my mind I said, ‘I really need something to fall out of the sky and land in my lap.’ Al called and said, ‘I’m going to send you a tape. Check it out.’ I was like, ‘Oh man, I’ve always wanted to play with a real obnoxious tone like Chris Squire.’”

Meros bought a Rickenbacker bass, just like Squire’s, and the original four-piece lineup was complete. But that situation would soon change.

“It wasn’t really a band then,” Meros said, “it was a recording project. Neal did all the keyboards (on the album) … we wanted to do some gigs and Neal couldn’t do everything.” So the band added a second keyboardist: Japan’s gift to prog rock, Ryo Okumoto.

“I met Ryo in some club, playing in some funky blues band,” Alan Morse said. “He was pretty awesome, so I thought maybe he’d be into it. He showed up for the audition with The Light completely charted out, and then just proceeded to play it almost flawlessly. So we said, ‘OK, I guess you got the gig.’”

With the five-piece lineup in place, it was time to pick a name. “I came up with this big ol’ list of names, and (Spock’s Beard) was just a kind of joke,” Alan Morse recalled. “It was an inside joke with Neal and me. If something weird happened, we’d say, ‘Dude, that’s like Spock’s Beard from a parallel universe.’”

“Everyone would come in with a list of names,” Meros stated, “and the serious ones sounded real pretentious. That’s not who we are – we’re just a bunch of dudes with 15-year-old senses of humor. … The only (name) that never really wasn’t completely objectionable to everybody was Spock’s Beard. That was on everybody’s list as a joke at the end, and finally we felt, ‘Well, this seems to be the one that’s surviving, so let’s just use it. … We were fully expecting to be sued by [Paramount, owner of the Star Trek franchise].”

One band member actually had an encounter with the entertainment giant. Alan Morse told the tale: “We used to make up all these stories about the name, and every time we’d tell a different one about where the name came from because we didn’t want to get into trouble. Finally, one day I said, ‘I’m sick of doing this. Let’s just tell people what the deal is.’ So I was out to dinner with a bunch of people and I told them the story. One guy goes, ‘That’s interesting. Actually, I’m an attorney at Paramount. … But don’t worry, it’s cool.’”

Legal risks aside, the Trek connection has paid off for the band – sort of. “We actually got a gig at a horror and scifi convention because of our band name, not because of us at all,” Meros remembered. “Nobody even showed up. It was a giant convention, with 15,000 people over the weekend. We were in this big ballroom. There was about 40 or 50 people there. I guess everybody else would rather hear George Takei speak.”

Even if they didn’t catch on with the scifi community, things were happening for Spock’s Beard, as The Light was picked up by a small prog-oriented label, Symphonic Records. Meros recalled that label owner Greg Walker “spent more on the artwork than we did on the whole record.” 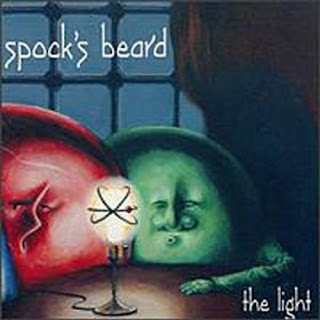 Even with a small launch, the 1995 release of The Light caught some attention upon its release. “Everybody dug it,” D’Virgilio said. “[Dream Theater drummer] Mike Portnoy even heard about it and started to say good things about us in his little circle.”

The band members were further encouraged when they played their first gig of note as Spock’s Beard in 1995 at Progfest in San Francisco. “We had no idea there was anything like (Progfest),” said D’Virgilio. Meros added, “That was when we discovered that there was indeed a prog audience.”

Besides an enthusiastic reception from the cult of prog, this show also gave the band another break, as Thomas Waber, founder of German prog label InsideOut, was in attendance, and met and eventually signed the group.

The band started getting serious, playing more gigs, tightening up its act, and starting work on a second album.

Spock’s Beard was on its way.