I SEEN IT ON TV

DOC ROGERS AND THE ROC DODGERS:
"LIFE'S TOO SHORT TO EAT CHEAP PIZZA" 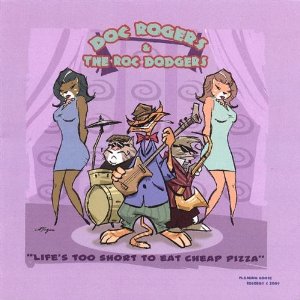 The title of the 2007 release from Doc Rogers And The Roc Dodgers echoes a saying I have said many times, although I phrase it as "life's too short to eat bad pizza."

Starting out, we have a sound philosophy.

The album itself straddles the border between country and blues, and the rockabilly neighborhood is not too far a trip.

The lyrics come from the Weird Al Yakovic or Randy Newman school of writing.

Stephen T. McCarthy did a post a while back where he likened Terry Rangno's lyrical style to Jim Stafford (remember Spiders And Snakes and My Girl Bill from the 70's?). Normally I'm not a fan of such albums-they tend to strike me as novelty discs, and does anyone really ever pull out their old Weird Al CD's?

This album holds together better than any novelty album, however, and the lyrical themes from 2007 still hold up in 2011. They are funny, but I'll warn you ther are a little on the conservative side, but so true. To keep this a bipartisan music only post, I won't quote them too much.

"I know them talkin’ heads would never lie to me

The guitar work is provided by Larry Rosen, who is also featured in Slavin David's band, and gives a nice look at his range-not so much a departure from the more rocking blues of the Rock And Roll Road album, but putting a different spin on those blues riffs.

This is not an album for teenagers, or adults who think Lady GaGa is sophisticated. If you like folksy blues
and intelligent lyrical themes, this is an album for you.

If you want dance pop or "America Rules" anthems, there are plenty other discs out there to choose from, but you way want to listen to this one anyway and cultivate your tastes and your mind.

I couldn't find any clips, but HERE is a link to a page with samples. You can order the disc from CD Baby at this link HERE.