NOT A DIAMOND IN THE ROUGH 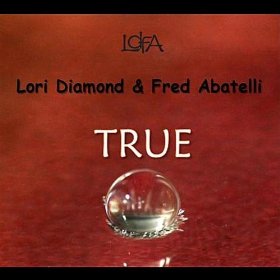 Lori Diamond and collaborator Fred Abatelli discovered each other through MySpace in 2007, clicked from the get-go and have been creating music together ever since.


With influences as disparate as Carole King, Billy Joel, Allison Krauss, and Miles Davis, it only makes sense that their 2011 album, True, is going to be all about the songwriting.

The album certainly delivers-the songs are well-written with wonderful melodies and introspective lyrics that delve into places in the human psyche that we often are not willing to publicly bare. Diamond sings them in an emotional vocal style that suits the material. That emotional openness helps to create a bond between Diamond and the listener.

Soulful vocals are plentiful on the album, as the artists weave an intricate web of gorgeous vocal harmonies over piano-driven arrangements. Lori Diamond’s has a voice is easy to listen to, lush and alluring, and the songs are classic singer/songwriter fare delivered with emotion and honesty. Abatelli’s playing contributes solid finger work and clever phrasing on bass and guitar, providing just the right rhythmic complement.

I thought that some arrangements might have benefitted from a denser arrangement to make the songs more radio friendly, although I can hear songs like “Choosing Peace” or “The Inside” as likely singles (if there still were singles). The overall production is quite good, and the arrangements are beautiful with top notch musicianship.

But what really stands out? Like I said before, it’s all about the songwriting. Diamond really delivers some gems.