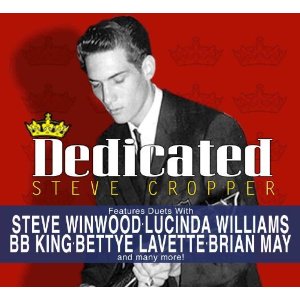 It was one of those seminal moments in music history. The 5 Royales had just finished a performance at the Tropicana in Memphis when guitarist Lowman Pauling was approached by a tall young white boy. This was unusual for the time; the only white people who met the band backstage were promoters or record executives.

The young Steve Cropper wanted Lowman to show him how to "make that guitar stomp." In an impromptu performance, the guitarist showed his stuff for Cropper and his best friend, Donald "Duck" Dunn.


Dedicated, the title of Steve Cropper’s latest album, a tribute to The “5” Royales, says it all about the legendary Stax musician’s lifelong devotion to the life transforming power of soul music.

As the original guitarist of Stax Records house band Booker T. & The M.G.'s., Steve Cropper has had a storied career. Voted #36 on Rolling Stone's 100 Greatest Guitarists Of All Time, Cropper has worked with blues legends such as Otis Redding, Wilson Pickett, and the Blues Brothers Band. In short, he has an impressive resume.

This album, his debut album on 429 Records, features reworked versions of the Royales' most enduring songs, and includes duets with Lucinda Williams, Bettye LaVette, John Popper, and Sharon Jones.

Cropper's guitar is superb throughout, with tight rhythms and unique fills that seem to flow straight from his heart, soulful, rockin', rhythm and blues sounds that take you back to the 1950's.

Cropper's playing is classic, with tight rhythms and unique fills that seem to flow straight from his heart, soulful, rockin', rhythm and blues sounds that take you back to the 1950's.

Upon the completion of Dedicated, Cropper wrote "It's been the most fun I've had making an album in a long time". Pick this up, and I promise you you'll have fun, too!


SAY IT (Live with Bettye LaVette)