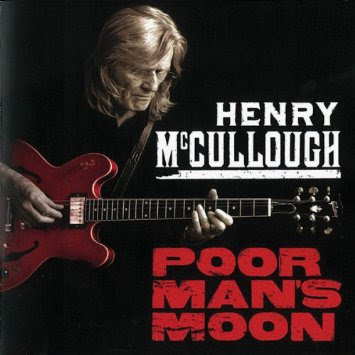 Henry McCullough has played guitar on several records you have probably owned over the years-he was the lead guitarist on the original rock opera Jesus Christ Superstar, played in the Grease Band with Joe Cocker at Woodstock, and picked the stellar solo on "My Love" during his tenure with Paul McCartney's Wings.

Henry returned to Ireland after leaving Wings and established himself as a songwriter (his "Failed Christian" was recorded by Nick Lowe) and released nearly a dozen records under his own name before passing away last month.

One of his more recent releases, 2008’s Poor Man's Moon, shows the gentler side of Henry's music, with an easy rolling JJ Cale feel.

There are Celtic and country stylings in the music, but the prevailing atmosphere is soulful and bluesy.

The songs on this album feel lived in, mature compositions that come with a lifetime of experience. When McCullough takes his guitar out for a spin, he can still deliver the goods, but there is no showing off here-the guitar is mostly tastefully restrained within the structures of the songs.

There are treasures on this record the repay repeated listening.

This record was released on McCullough’s own SIlverwolf label, and is a CDR.

It’s out of print, and I bought mine from Amazon seller ImportCDs.com and it was not cheap.

They were willing to give me a refund, but only if I paid to ship the disc back to them. Had I know what I was buying, I’d have purchased the digital album at a third of the cost.