DUSTING OFF AN OBSCURE GEM 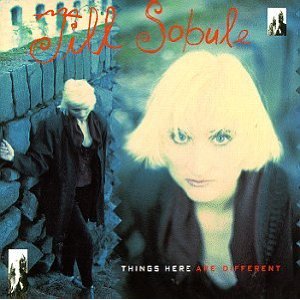 Most people first heard Jill Sobule through the novelty hit "I Kissed A Girl," not the Katy Perry single, but the 1995 single about a lesbian flirtation between two suburban girlfriends which became an unlikely success thanks to a comedic video featuring beefcake male model Fabio.


In my opinion, Things Here Are Different, her debut, is still her high water mark, and not just because it was produced by a certain Rundgren fellow.

This disc is loaded with simple songs sung in an pure insightful yet childlike voice, finding a perfect foil in Todd's usually heavy-handed production style. Where he often made anyone he brought into a studio sound like a Utopia side-project, in this case he framed Jill almost perfectly.

Jill's folk-inflected compositions alternate between ironic, story-driven character studies and emotive ballads. The central themes of her lyrics are characterized on her site as "love found, love lost, love wished for and love taken away."

Songs like "Too Cool To Fall In Love," a lite piece of desire/heartache that got modest radio play at the time, are among Todd's finest moments as a producer.

Sadly, the album was not successful and Jill was dropped by MCA, but her songwriting excellence was apparent on tracks like "Living Color," "Pilar (Things Here Are Different)" and "Evian."

My personal favorite song is "Life Goes On Without You," although the whole album was excellent-everything in its place.

Jill would find some success with "I Kissed A Girl" on the self-titled follow-up from 1995, as part of the wave of female singer-songwriters signed in the mid-90's (that included Lisa Loeb, Juliana Hatfield and Alanis Morissette), but that success would be short-lived.

This one is usually pretty easy to find used (and cheap), but is well worth picking up.

TOO COOL TO FALL IN LOVE


LIFE GOES ON WITHOUT YOU