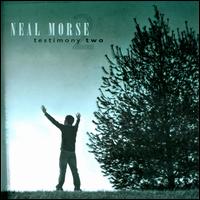 Neal Morse shocked the progressive rock world by announcing his departure from the band he started, Spock’s Beard, immediately following the release of their sixth album Snow.


Neal felt a calling to make his personal faith more prominent in his recorded output and felt that this would not be possible or appropriate in a band context. And you have to give him credit for sticking to his inspiration when the band was just reaching commercial success.

In 2003, Neal Morse released his Testimony album, an epic, introspective composition which features Kerry Livgren of Kansas and Mike Portnoy of Dream Theater.

With the sequel, Testimony Two, Morse goes even deeper into unchartered musical and lyrical territory.

Legendary drummer Mike Portnoy returns, and with the help of excellent bassist, Randy George, Morse’s breathtaking follow-up is a prog epic that dazzles with melodies and lyrics that reach into the soul.

Morse gives listeners another glimpse of his personal and spiritual journey on Testimony Two, beautifully capturing the conflict he felt as he toured in a rock band by night while undergoing a spiritual transformation by day.

The conflict in the lyrics show a man who is truly struggling not only with his faith, but with his own identity, and this directness is what makes the album compelling.

This straightforward approach makes Testimony Two an album that will serve as inspiration for fans of Morse’s post-spiritual awakening work, and provide a document of his life after leaving Spock’s Beard.

THE TRUTH WILL SET YOU FREE