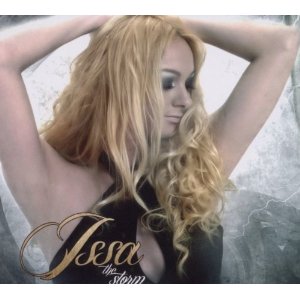 Frontiers Record’s marketing for Norwegian vocalist Issa plays up the whole 'sex-kitten'
angle that really does not suit her, or her new album, The Storm..

The lady is an AOR talent, but comparing her in a press release to Celine Dion and Avril Lavigne is somewhat misleading.


Issa is a powerful female lead vocalist with a solid band behind her, performing memorable melodic hard rock with a modern edge to the album in the guitar tone and production, and Issa’s very likable, melodic vocals.

The selection of songs features compositions from the label’s gang of usual suspects, and there are some great songs on here, but I’d rather see Issa contribute more than the three tracks cowritten with husband James Martin, two of which are album highlights.

This follow-up features great production with a similar energy, the same powerful vocals and a good dose of melodic hard rock. The production has some modern tweaks, with a little more contemporary sound than the debut.

The songs are good, and stand outs include the super catchy and hook filled “Looking For Love,” the monster power ballad “Invincible” and another ballad, “Too Late For Love. “

Recommended for fans of melodic rock.