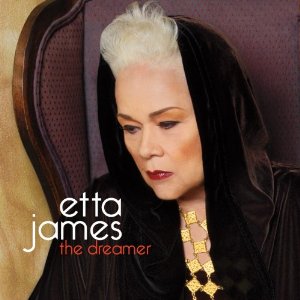 Etta James was hailed as the “greatest of all modern blues singers”, in the words of Atlantic Records founder Jerry Wexler. Outside the studio, James has had a turbulent life, fraught with drug addiction, bad relationships, and jail sentences.


Now 73 and dogged by illness, James says she's hanging up the mike after a career of more than 50 years.

You might expect her farewell album, The Dreamer, to demonstrate the ailing singer’s railty and weariness, a soul singer’s trip down the darkening lane that Johnny Cash trod in his later recordings.

This batch mostly of vintage R&B classics (recorded in 2008) is a raw, emotional reminder of why James endured for so long, covering most of the bases touched by her magnificence over the past 50 years.

James's voice is slightly diminished but not so much as to still not be the real deal on this chugging ensemble dominated by guitars and horns. Sometimes stately, seldom subtle, the singer remains a vivacious and strong-willed presence throughout the album.

James puts her soul stamp on everything from the simmering Cigarettes & Coffee (Otis Redding) to the hard-rocking Welcome to the Jungle (Guns N' Roses). The works of Ray Charles, Bobby "Blue" Bland, Johnny "Guitar" Watson and others get similar treatment, assuring that James won't bow out quietly

Outstanding songs include Dorothy Moore's "Misty Blue" and Bobby Bland's "Dreamer". Another highlight is a worldly, seductive take on Otis Redding’s “Cigarettes and Coffee,” as good a note as any on which to exit.

She will be missed.


WELCOME TO THE JUNGLE