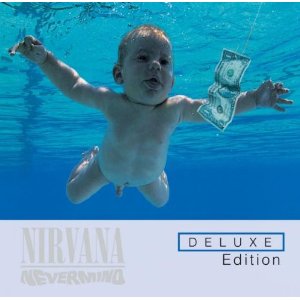 This song sheared the hair off the hair bands and knocked the King of Pop off his throne.

Although this was their second album, Nevermind was their major-label debut, so Nirvana was viewed as an overnight sensation.

Issued to celebrate the platinum anniversary of it's original release, the Deluxe Edition of Nevermind is quite a comprehensive collection of songs from this era of the band.


I won't go into the songs very deeply, as everyone knows the album by now. I did not preview the whole package, since no one sent me a preview copy (ya hear that, Universal?), but I found tracks in lossless format of (ahem) questionable origin online and listened to them.

While I often do not hear the differences in remasters, I do here. The album's sound has been carefully remastered, not overdone, but sounding fresher and crisper than before. For die-hards worried about whether or not 'Endless, Nameless', the famous hidden track on the original album is present, it is, only the dead-space silence has been cut.

After the orginal album, disc one presents the B-sides tracks from each of the four singles released from the album, including live tracks. If you have the Singles box set, you already have all these, although they too have been remastered.

Disc two starts with the Smart Sessions, showcasing the band rehearsing such powerhouse songs like 'In Bloom'. The With The Lights Out box set already had released 'Pay To Play' and 'Here She Comes Now,' but completists will want the other tracks.

The disc continues with "The Boombox Rehearsals," sounding rough around the edges, but an interesting lsten into the orgins of these soon-to-be classics. The last two tracks were recorded at the BBC, including 'Something In The Way' performed electric.

So, with all that said, is it worth it?

I was not a huge fan of the band, but if you found yourself holding a vigil after Kurt Cobain died, and you don't have either the Singles or With the Lights Out box sets, I'd think you'd want to spring for this not only for the extra tracks but for the improved sound.

There is also a Super-Deluxe five-disc box set for the hard-core fans, with a DVD and extra audio discs featuring alternate album mixes, more BBC recordings, music videos and a hard-cover book. It wouldn't surprise me if there was a scratch-and-sniff Courtney Love centerfold in there!

Three-month-old Spencer Elden was the little tyke showing his junk while reaching for a dollar bill on the album cover.

Elden told reporters that being the Nirvana baby has its perks. He references it when trying to pick up ladies, and was once invited to swim in a rather wealthy woman's pool.