Born in Philadelphia, David Bromberg began studying guitar-playing when he was 13 and eventually enrolled in Columbia University as a musicology major.

The call of the Greenwich Village folk scene in the mid-'60s drew David to the downtown clubs and coffeehouses, where he could watch and learn from the best performers, and his sensitive, blues-based approach to guitar-playing earned him jobs playing the Village "basket houses" for tips, the occasional paying gig, and lots of employment as a backing musician for Tom Paxton, Jerry Jeff Walker and Rosalie Sorrels, among others.


He became a first-call, "hired gun" guitarist for recording sessions, playing on hundreds of records by artists including Bob Dylan (New Morning, Self Portrait, Dylan), Link Wray, The Eagles, Ringo Starr, Willie Nelson, and Carly Simon. In the early '90s, David produced an as-yet-unreleased Dylan album, although two tracks have been issued as part of Dylan's "Bootleg Series."

Bromberg's range of material, based in the folk and blues idioms, continually expanded with each new album, but despite a string of acclaimed albums on the Fantasy label, Bromberg found himself exhausted by the logistics of the music business. Though he still toured periodically, the recordings slowed to a trickle and then stopped.

Bromberg emerged from a recording hiatus of 17 years in 2007 (Try Me One More Time) that thrilled fans and critics alike and was rewarded with a Grammy nomination. 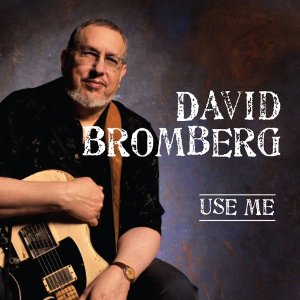 His follow-up album, Use Me, due on July 12, takes a different approach, allowing some of his favorite singer-songwriters and musicians to write, produce, and perform on songs with him.

Rather than collating individual instrumental parts literally phoned in to a central location, the recording sessions for Use Me generally took place on each guest artists' home turf - in Woodstock (Levon Helm), New Orleans (Dr. John), Nashville (John Hiatt) and so on, to retain their regional flavors.