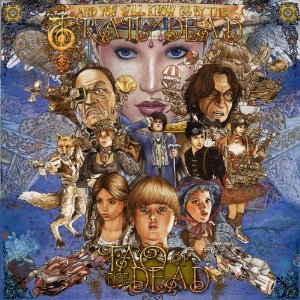 ...And You Will Know Us By the Trail of Dead have consistently specialized in soundtracking the breaking of the seventh seal, while seemingly reinventing itself with each new album.

Tao Of The Dead finds the band channeling prog-rock affectations into a remarkably cohesive set of songs that works best when listened to as two epic song cycles.

At nearly forty minutes, part one almost feels too brief, but just before you hit the replay button, the equally impressive sixteen and half minute second act moves from roaring punk anthems to beautiful, shimmering soundscapes, adding up to one fantastic listening experience, that progs in the vein of your favorite Rush or Yes record, if Rush or Yes had had an upbringing in full-throated punk and feedback-drenched indie rock.

There's a fluidity to this record that instinctively dips into haunting atmospherics and rises back up into anthemic tracks, a crucial ebb and flow that Trail of Dead has mastered. These carefully crafted progressions give Tao of the Dead that continuous 52-minute feeling that Keely was aiming for.

Keely has stated in interviews that it's this kind of record that he grew up listening to and wanted to emulate, and maybe that's why Tao of the Dead ends up being the most focused Trail of Dead effort in years. I can't recommend this album highly enough.