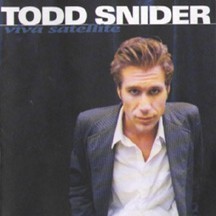 Viva Satellite was the finale of Todd Snider's three-CD deal with MCA, and maybe since they used to have a certain Wilbury brother on their roster that accounts for the Tom Petty vibe on this album. Heck, on "Out All Night" and "Yesterdays And Used To Be's," Todd is doing a spot-on Petty imitation, although it leaves Viva as the most rockin' of Snider's albums.


True to pattern, Snider tacks another hidden track onto the last song, "Nervous Wreck," which is another Petty homage and a rocker. It could be the influence of switching from Jimmy Buffet's producer to John Hampton, who had previously worked with the Gin Blossoms and no stranger to a more mainstream radio sound.

With his tongue planted firmly in cheek, Snider draws his masterpieces of trailer parks and troubled times, creating characters that come alive, his knack for storytelling and writing lyrics, while not quite up to the bar set by his debut, still sets him apart from the competition.

Unlike the debut, this album has its flaws, and the first sign that you're "Jumping The Shark" in music is a useless cover of a song that was fairly useless to begin with, like maybe Steve Miller's "The Joker." The cover, while quite entertaining, really adds nothing to the album and I'd have rather seen another original (or make the cover the hidden track). I can only assume the label was looking for a single with this one.

When Snider and his band are on, it's hard to find songs that are much better, and there are some essentials here ("Can't Complain", "Doublewide Blues"). The more polished rock sound does not fit his "storyteller" persona as the production on the first two albums, but Snider still has put together some fine songs with a punkish persona that masks the great sensitivity which he isn't quite mature enough to reveal. Sadly, his subsequent work for the "Oh Boy" label would be even more firmly rooted in the country genre, and while still quite good, simply not in the same class as the first three albums.

Another exceptional CD by Todd Snider, although not as essential as Songs For The Daily Planet.

Late Last Night (this is from the second album, but features the band from the old days)