GRACE POTTER AND THE NOCTURNALS 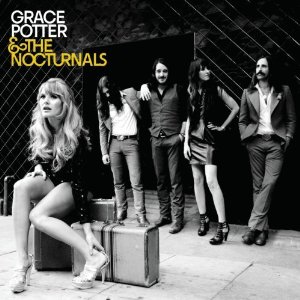 Lyrics are important to me. Sometimes a song will have it all, great melody, great singing and playing, but the lyrics just aren’t there.


Case in point is “Paris,” the opening track and lead single from Grace Potter And The Nocturnals’ eponymous CD.

The track rocks, it really does.

Grace is bluesy, steamy and sexy. I listened to this song for the first time, and I had to loosen my collar to let the steam out as the bluesy music and lyrics led up to a climax.

And then you get to the chorus:

Letdown-all of the sizzle faded with that line.

Really? That’s the lyric? That's the best ya got?

Okay, so call me fussy. I just wish the song that broke GP was not so….DUMB.

But break her it did.

This lineup of Grace Potter and the Nocturnals are like a modern-day version of Tina Turner stroking the microphone in a spangled mini-dress while fronting the Rolling Stones circa Sticky Fingers.

The band's third album for Hollywood Records marks an artistic and commercial breakthrough for a vital young band. Titled, oddly enough, Grace Potter and the Nocturnals, the band has crafted a truly great album, with tracks that rock like an earthquake.

Potter may be showing off her legs in a short skirt, but what you wear ain't the point.Not that her legs don’t look good, but don’t forget to leave room for music that is genuine, tight and has just enough grit. This album combines a sexy mixture of rock and soul and as long as you can get past that silly chorus, you’re going to like this album.

And that'll show ya!