GET YER GO GO BOOTS ON 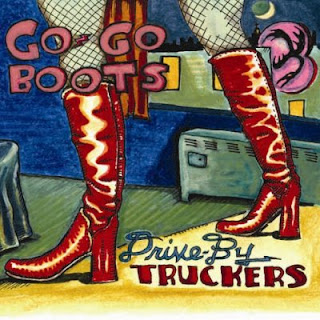 Some albums you have to let sink in, you know? Let it percolate, distill and spread to the far corners of your brain.


Go Go Boots, the eleventh album from Drive-By Truckers, is exactly as described in the band's promotional material - country soul, pulling from both strains equally but still managing that unique and distinctive sound that the DBT’s are known for.

The songs tell stories that are engaging and captivating while maintaining a simple directness and a ring of ripped-from-the-headlines truth. The music is gritty and raw, taking a slower pace than the band's earlier albums, with a running order that keeps the listener engaged. This is not a return to "Dirty South/Southern Rock Opera" form. The electric guitars are turned down yet the album still possesses a slow burning intensity, building on their roots in the old Muscle Shoals country-and-soul sound.

Patterson Hood and Mike Cooley continue to be the chief songwriters of the group, continuing a musical partnership that has lasted over twenty-three years. Bassist, Shonna Trucker, flexes her songwriting muscles once again by contributing two original songs to the album. Brad Morgan (drums), John Neff (guitar/pedal steel) and Jay Gonzalez (keyboards) round out the current Drive-By Truckers lineup.

Overall, this is an album that gets better with each listen.

USED TO BE A COP