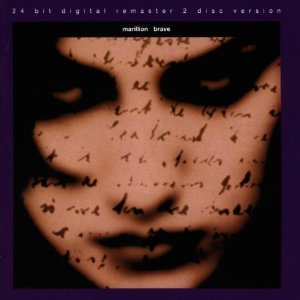 I was late arriving at the Marillion party. Introduced to them verbally at an old friend’s (how ya doing Terry?) wedding in the early nineties, Fish had already left the band by the time I was aware of their existence.

Tom, the friend telling me about them, described them as “sounding like old Genesis,” apparently referring to the Fish years.

The first disc I happened across was Six Of One, Half Dozen Of Another, a compilation that really made the band feel a lot like Genesis, as the early Hogarth songs had similar commercial elements and pop sensibilities to the commercially successful Genesis material.

Brave was the first new release I picked up from Marillion, and for a long time I didn’t get it.

And when I say a long time, I really mean years. Maybe a decade. Maybe more.

This was an album that the "faithful" always raved over, and I just never saw it.
In recent years, I picked up the Brave DVD and returned to the album, playing it repeatedly for more than a month, and it really started to take hold.

This is a complex album that you have to invest time in to really hear it.

Brave is mood music, a dark, somber story of a tortured childhood. Inspired by a news clip about an unidentified young woman found on a bridge alone at night, this is the rarest of concept albums, following its concept from beginning to end.

The storyline has the lead character’s life playing out from one bad moment to the next, from birth to the moment she jumps off the bridge and beyond. It is emotional, dark, and creepy.

The music really suits the storyline, very dynamic, soft and slow one moment and loud as hell and frantic the next. The emotion of the material is intense, and Steve Hogarth's (the singer who replaced Fish) lyrics and singing came of age on this album, giving the band a new identity with the new lineup.

Brave is NOT a pick-me-up. It is, however, a very cohesive piece of art, that, save for one or two missteps, begs to be listened to in one sitting.

Brave is an experience, and you have to listen to it that way. Skipping songs or just listening to the first couple of songs and then shutting it off will not give you a sense of the content, and you’ll be just like I was for years-you won’t “get it.”

Do not buy this album unless you are willing to give it time to sink in. This is a concept albums that does not offer instant gratification-you really have to listen to it. A lot.

The liner notes suggest that you "Play it loud with the lights off", and I concur. In addition, I suggest that you also wear headphones, as there are an awful lot of quiet moments you will miss.

This album can be found in fine indie stores and on Amazon, and I am anticipating some sort of twentieth anniversary release considering the special edition re-releases of other Marillion titles on the Snapper/Madfish label.

I would also suggest checking out the promotional film and the live performance from a fan weekend, both available on DVD at http://www.marillion.com/.


ALONE AGAIN IN THE LAP OF LUXURY (live)


ALONE AGAIN IN THE LAP OF LUXURY