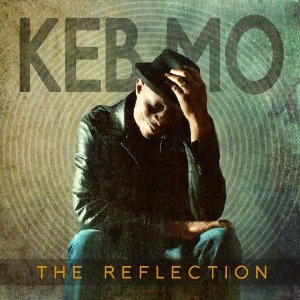 Having won three GRAMMY Awards for Best Contemporary Blues Album, Keb Mo has established himself as one of the most dynamic blues musicians working today, and no one could fault Kevin Moore for playing it safe and releasing an album that sticks to the formula for which he has had such success for so long.

In fact, based on the title, The Reflection, one might assume that Moore's new disc is a greatest hits collection.


On his first album for new label Rykodisc, Moore takes a different musical path, and if you listen to The Reflection expecting to hear the usual soulful blues approach, you might be disappointed.

Gone are the down-home blues-folk leanings, the new album is a fusion of influences from across Moore's career featuring twelve songs that display the same songwriting craftsmanship that Moore is renowned for, with beautiful melodies and meaningful lyrics.

The results are phenomenal, with incredible vocals that blend pop, R&B, soul and jazz elements with catchy grooves and lush arrangements.

Moore's acoustic guitar is scarcely to be heard in this collection, and the blues are a fainter influence. Every song on is expressive, infectious, and well written, and the production is crisp and fresh.

The mix allows the various layers of instruments and voices enough space for each element to be fully heard without an overdone feeling.

Moore handles or shares lead vocals on every track, and plays lead guitar on a majority of the tracks drums and electric piano on occasion as well.

The album features an all star list of guest musicians which include Vince Gill, India.Arie, Marcus Miller, Dave Koz and David T. Walker.

Because Moore takes a different approach on this disc, long-time fans may struggle with the new musical territory.

I would recommend giving this disc a listen-Moore still plays the guitar like he was born to it, and the brilliant songwriting will win most skeptics over.


ONE OF THESE NIGHTS (Eagles cover)