INVITATION TO THE BLUES 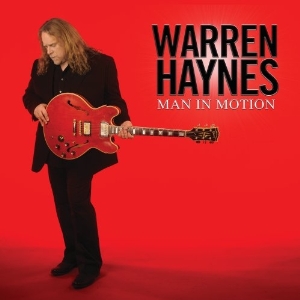 Warren Haynes continues to be one of the most lauded straight-ahead rock lead guitarists performing today. From his role as front-man for GOV'T MULE and vocalist and guitarist for THE ALLMAN BROTHERS and THE DEAD, there is no disputing his credentials.

His latest effort takes the journeyman musician back to his roots, and finds him revisiting the southern soul tones that form the bedrock of his sound. Released on the Stax label, he could not have found a better home.

On Man In Motion, Haynes' vocals are in the spotlight, with bold and emotive delivery in a smoky vibrato recorded live in studio to capture all of the emotion, passion and spontaneity. All Haynes originals except for one cover, these songs groove and rock. Backed by a stellar band, Haynes delivers a soulfully mellow album featuring tastefully restrained guitar work while highlighting his abilities as a composer and vocalist.


This is the album Stax has been looking to release for a long time. Haynes hits it out of the park with this effort, a great funky soul-drenched set celebrating the music that he listened to as a child.