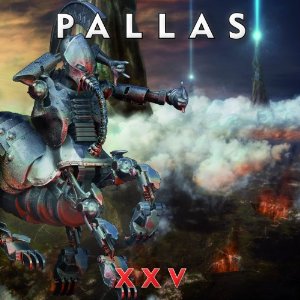 Pallas were one of the bands at the vanguard of what was termed neo-progressive during progressive rock's second-wave revival in the early 1980s (the same wave that produced bands like Marillion, IQ and Pendragon).

Courted by EMI, home to the aforementioned Marillion, the band recorded The Sentinel, a concept album based upon The Atlantis Suite, an epic centerpiece of the band's live performances at the time based around a futuristic version of the story of Atlantis with plenty of references to the Cold War.

All this boded well for Pallas, but EMI's initial interest in the band waned, and when The Sentinel was released in 1984 it was regarded as a compromised affair by all involved (despite sporting what was regarded as one of the genre's most beautiful covers ever).

After a second album, the band was inactive until the end of the following decade. They released three studio albums between 1999 and 2005, and at last, XXV, the long awaited sequel to The Sentinel has arrived.

From start to finish, XXV is a creative, energy filled, prog oriented release that sees the new lineup very tight and playing off of each other better than ever.

Great guitar, bass, and keyboard riffs are abundant here, all kept in line by the drums. XXV is a little heavier at times than past releases, and features a fairly bombastic, keyboard-dominated sound that is a nice blend of progressive and AOR with a splash of metal. The songs are well-written, and if you're familiar with Pallas you'll know just what to expect.