WHAT RHYMES WITH 'ROCKIN'? 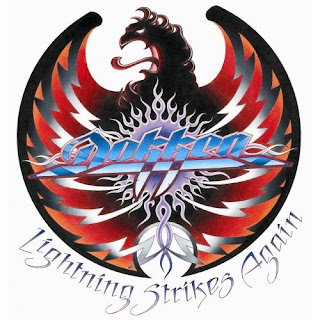 Dokken is the answer to the question posed by the title of this post. I saw Dokken in late March, and while they are a fun band, Don Dokken asks that question a little too much. After all, can you still be a hair band when most of your audience has no hair? Dokken was formed in 1976 and was one of the classic hair metal bands of the 80s. Only Don Dokken and Mick Brown remain from the original line-up, and Lightning Strikes Again is the tenth studio album released by the band.


Taking its title from a track on the band’s platinum 1985 classic Under Lock & Key, the new songs bring the group’s sound into the new millennium, while remaining true to their roots. Mixed by Wyn Davis (Dio, Great White), the album features Don Dokken (vocals), Mick Brown (drums), Jon Levin(guitar), and Barry Sparks (bass). The album captures the signature mix of barbed-wire riffs and razor-sharp melodies that made Dokken one of the most dominant creative and commercial forces in the world of melodic hard rock.

But keep in mind that this is not Dokken circa 1986 with George Lynch shredding every song and Don's voice in his prime. But for the 2008 version of Dokken, this is a very good album, and certainly the best in a long time. This is a very strong album, with a nice mix of up-tempo tunes mixed with a few of Don's classic love-gone-bad ballads. Newcomer Jon Levin's guitar work is a pleasant surprise, and he makes strong songwriting contributions. Don's voice has taken a beating over the last 25 years and his vocal range is noticeably smaller than it was back in the mid 80's, but he still demonstrates strong melodic styling.

This is a solid album, and a welcome return to form.


How I Miss Your Smile
Heart To Stone
Squeeze into those leather pants and hold that lighter up, no Dokken (or hard rock fan for that matter) will be disappointed!