FIRST TIME FOR EVERYTHING 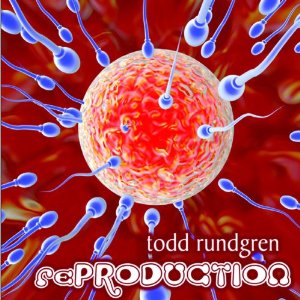 Todd Rundgren is as well-known as a producer as an artist.

His work on Meat Loaf's Bat Out Of Hell pretty much paid for his property in Hawaii (which is a long way from Upper Darby, my friends), and he's produced such acts as Patti Smith, The Band, New York Dolls, XTC, The Psychedelic Furs, and a plethora of others.


As an artist, although Something/Anything? is regarded as the hallmark Todd Rundgren album, I am partial to 1989's Nearly Human.

It features introspective and mature songwriting, and where most of his studio output had seen Todd play studio wizard and perform the whole album himself, this album used the "live-in-the-studio" technique that had been missing since side four of S/A?, but with material and themes reflecting a mature perspective.

I have heard Todd admit that being part of a band makes him a better musician. In my opinion, he has not come close to matching Nearly Human in the two decades since its release. Although 2004's Liars received critical acclaim, it was mostly electronic music (not my cup of tea). Since the songs were TR originals, after a few months of constant rotation, they did grow on me. 2008's Arena featured lots of guitar and arena-rock anthems, and may be my fifth-favorite TR/Utopia disc-I still play that one frequently.

2011 is a bonus year for Rundgren aficionados, with two new discs released in a span of five months. Sadly, both are covers discs. April's Todd Rundgren's Johnson covers songs from the Robert Johnson canon, albeit rather electrified in an Arena-fashion. And in September, we are treated to (re) Production, which covers selected tracks from the albums he has produced over the past four decades.

I almost did not buy this disc.

In March, the record label had a release party, but since the release date was half a year away, they pressed a three-song sampler to give away at the event. Since I could not fly across the country for the release party, I e-mailed the label (Gigatone Records) and it's CEO Mitchell Koulouris five times asking if I could purchase one and got no response.

On e-mail number six, I mentioned how ignoring a customer who wants to buy music with the current state of the music industry might not be the best strategy.

Mr. Koulouris sent me a scathing e-mail saying how people like me were never satisfied no matter what he did. Interesting, because he really did not know what kind of people I was like, and since he didn't do anything, why would I be satisfied?

I mentioned both of these facts to him, pointed out that I'd purchased his Eddie Money and Dwight Twilley releases and let him know that I'd start looking for Gigatone product used. And I did-both the Mickey Dolenz and Mickey Thomas released came from the used racks at Zia Records. The only thing more satisfying would be if they were promotional copies I bought used.

I considered waiting for a used copy of Todd's latest….but my support for my Upper Darby compatriot trumps my disappointment in the maturity level of Gigatone's management, so I preordered a copy from the Todd site, and the rest is history.

Is it here that this review takes an unexpected turn.

Here come the seven words I never though I'd say.

Seven words that may very well be a sign of the Apocalypse.

These are not the words George Carlin warned you about, but here they come….are you ready?

There. I said it. I have NEVER said that before. Not about any Todd album. I came close with one (With A Twist), but I think I used to just say "it's not one of my favorites."

In the liner notes Todd describes how during his "tenure" at Indiana University, he got into a discussion with his students regarding the mereits of new music versus old music. Lady Gaga was brought up, and Todd realized he was unfamiliar with her music. He decided to brush up on modern music, and found that it emphasized dance fundamentals. He saw this project as a way to record a modern sound with better material than most modern artists have to work with.

Why that inspired him to create dance versions of these songs is anybody's guess. Most of these songs are good in their original formats, and I would have loved to see Todd tweak them, but the "driving beats designed to bring new dance energy" do not work for me in many cases, and over fifteen songs it is overdone.

Followers of my blog know I am not a fan of covers albums, but I like the Robert Johnson album a lot. I like the covers on Faithful. Heck, Stephen McCarthy declared war on me once when I said I might like Todd's version of "Good Vibrations" better than the Beach Boys (and it's a note-for-note remake). He may still be looking for me by the way, so don't tell him I'm here.


Todd recognizes that if you cover a song you ought to do something different with it (although he did not approach his 1975 album that way, hence it's Faithful title), but did he have to do them all the same way?

The whole effort begs the question why? We already had to live through an album of dance-remixes of his own songs-haven't we been punished enough?

It's not all bad, but the track order doesn't help, as it opens with three tracks that I find unlistenable. Here's my take, song by song, in case you're interested. Where I was able to find sound clips, I attached them.


"Prime Time"-since the original had a little synthesized dance beat, this should have worked. However the key does not suit Todd's voice, the songs works better as a duet, and the rap Todd throws in makes this sound like a gag song. No amount of spinning will make this grow on me.

"Dancing Barefoot"-this just will not work as a dance song-all of the passion of the Patti Smith original has been washed away. Todd may have been better off reworking "Frederick." Singing the PS poem at the end is akin to nails on a chalkboard.


And Patti Smith's original, as produced by Todd

"Two Out Of Three Aint Bad"-another bad choice, to try to take a passionate ballad and make it a synth-pop song. However, if you make it through these three, it does improve a little.

"Chasing Your Ghost"-since I am least familiar with this song (the What Is This album was never released on CD, and I haven't listened to the record in years), this one is not bad.


"Love My Way"-there's no reason this song shouldn't work (since the original from the Psychedelic Furs was heavy on the electronic instrumentation) but it doesn't. I think Todd went to for too high a voice here, and he really hasn't had that kind of range the past decade or so.

"Personality Crisis"-another one that is not so bad-some of the vocal stylings I could do without, but the dance groove is not overstated and the material suits Todd's voice. The New York Dolls still did it better.


"Is It A Star?"-this may be the second best song on the album, and is the only example where I like what Todd did with this better than what he produced for Hall & Oates back on the War Babies album. The arrangement is a little faster than the original, and the dance groove fits right in. Todd is in fine voice, the background vocals actually add to the listening experience (on many other cuts they take away from it) and this is an enjoyable interlude in the midst of sonic chaos.

"Tell Me Your Dreams"-while I won't say I like this rehash of the Jill Sobule track, it does at least lend itself to the treatment. So I guess I can say it works, but it's not my kind of music.

"Take It All"-my third favorite track, and while I still prefer the Badfinger version, I do like this one. Again, light on the dance treatment.

"I Can't Take It"-the arrangement is interesting, and I guess I'd say it works, but I like the original so much better. The marriage of Cheap Trick with producer Rundgren was this power-pop fan's wet dream, and making a dance version of this song is to a power pop fan kind of like what making a peanut butter sandwich out of the communion wafer would be to a Fundamentalist Christian.

"Dear God"-this one is not bad, but if Andy Partridge feuded with Todd during the making of XTC's Skylarking, this version must have him declaring all-out war.

"Out Of My Mind"-another one that is not bad, but not an improvement over the Bourgeois-Tagg original.

"Everything"-one that could work musically but does not suit Todd's voice at all.

"Walk Like A Man"-my favorite song on the album, because this Grand Funk track plays to Todd's strengths and does not use the synth-pop cliches. This is the song that the "My Record Fantasy" attendees were included on. The clip shows one of the sessions from "My Record Fantasy."


"Nothing To Lose"-not bad, but not really much of a departure or an improvement on the Hunter song.

Overall, out of fifteen tracks, I like three, seven are not so bad, and five are songs I'd play as punishment for captured terrorists.

I'd gotten the CD in advance, and had it with me on my drives to Tucson and Vegas (see my post HERE if you want to read that story) but kept pulling it from the player.

In 1997, Todd released With A Twist, an album of bossa-nova versions of some of his singles. That album was retired from my CD player in short order, but (re) Production may have set a new record for being stuck up on a shelf. The combination of the electronic arrangements, the dance mix and lack of original TR compositions did me in.

Maybe Todd has forgotten that his fan base has aged with him-we need glucosamine and hip replacements, not dance versions!

Die-hards will want this no matter what, but if you're a casual fan looking for "Hello It's Me," might I suggest Rhino's 180 gram LP reissue of S/A?

If you're not a die-hard and are unfamiliar with Todd's productions, I'd recommend looking for a copy of 1992's An Elpee's Worth Of Productions, which was the same compilation idea but used the original songs by the original artists.