IS THIS THE REAL LIFE?

QUEEN: A NIGHT AT THE OPERA 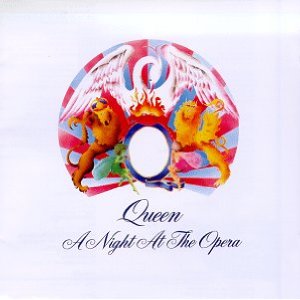 Queen's fourth album, A Night at the Opera, was originally released in December of 1975. This was the band's "last chance" album, the label expecting the band to deliver of the promise of the success of the "Killer Queen" single. Had the album flopped the label would have probably dropped the band.


When this album was released, it went to #4 in the US and became Queen's first million seller, and the rest, as they say, is history. Although lead singer Freddie Mercury died in November 1991, and the band's popularity had lagged in the 1980s, sales of Queen albums went up dramatically in 1992, the year following his death. In fact, half of the 32.5 million Queen albums sold in the United States have been sold since Mercury's death.

Not a bad legacy for Farrokh Bulsara from Zanzibar!

The surviving members of the band and the label have gone all out on the 2011 edition of this classic Queen album. The audio is crisp and deep - the quiet passages are actually quiet instead of being filled with hiss and digital noise like on the original EMI imports. More to their credit, they didn't mess with the mixes, song lengths, or do any of the other shenanigans that bands/labels often do when they do this kind of comprehensive update of their back catalog.

The album holds up well, kicking off rocking hard with "Death on Two Legs (Dedicated to...)," an ode to an ex-management company, lightening up with the vaudevillian sounding "Lazing on a Sunday Afternoon," before thundering into Roger Taylor's superb rocker "I'm In Love With My Car."

The album's biggest hit and Queen's arguable greatest moment, is the nearly six minute "Bohemian Rhapsody." The song is Mercury's magnum opus, a song unlike any in rock history, with an operatic section achieved by overdubbing voices until the master tape almost deteriorated. This song would be Queen's first US Top 10 hit (reaching #9 in 1976, and later reaching #2 in 1992 thanks to being featured in "Wayne's World".

There is a bonus CD, and one could argue the merits of the additional disc when the extras could have easily fit onto the main disc.


YOU'RE MY BEST FRIEND

I'M IN LOVE WITH MY CAR