Born on the Internet four years ago as a “light bulb moment” for Daryl Hall, Live from Daryl's House, the Webby and MTV O Music award-winning webcast, will make its broadcast premiere nationally with two back-to-back half-hour episodes featuring Train and Fitz & the Tantrums, on Saturday, Sept. 24. The show will be syndicated nationally by Good Cop Bad Cop Productions in association with Scott Sternberg Productions and distributor Trifecta Entertainment & Media. Executive producers for the show include Hall and Scott Sternberg along with Daryl Hall manager Jonathan Wolfson.

Live from Daryl's House marks the first full-length music web show to successfully cross over into the television syndication marketplace. LFDH has been a hit monthly live-performance web series since 2007, featuring Daryl Hall jamming (and cooking and drinking) with friends, musicians and guest artists. The 30-minute broadcast version is a performance reality series which takes place in the intimate setting in Daryl Hall's home.

“This is a dream come true for me,” said Daryl. “When I first had the idea for this series four years ago, I was hoping to reach a wide audience, and this is just another step in that plan. We're all raring to go.”

“It's been a delight and a reward for me to work with the legendary Daryl Hall, who has truly reinvented himself in the digital age,” said Sternberg, CEO of Scott Sternberg Productions. “Other than the regular late-night shows, there isn't a weekly performance series currently on the air where the top bands, artists and musicians can perform their songs and reach audiences nationwide. We look forward to helping fill that void, and we thank all of our station partners who are on board for the premiere.”

“I am amazed at the metamorphosis of the show. From being able to go from a small flip cam operation to an 8 camera, High Definition production that has marquis talent jam in Daryl's living room is incredible. We've been able to establish this series on the web thanks to the fans, and now to cross mediums, represents a tremendous opportunity,” added Wolfson. “We couldn't ask for better partners in doing so than Scott Sternberg and Trifecta Entertainment & Media.”

Live from Daryl's House has been cleared in nearly 80% of U.S. homes in the nation's top 200 media markets, as well as all of the top 10, including New York (WPIX), L.A. (KTLA), Chicago (WGN), Dallas (KDAF) and Houston (KIAH). The show has also cleared in such key markets as Philadelphia (CBS-owned KYW), Boston (KBIN) and Atlanta (WATL), and is set to premiere on a number of NBC, Fox and CBS-owned affiliates across the country. Most stations will air a full hour with two original shows back to back on Saturday nights.

“My time at Daryl's House was incredible,” said Train lead singer Pat Monahan about the experience. “Daryl's bandmates were super-seasoned pros and Daryl was gracious and right on with what I hoped such a legend would be like. Thanks all!”

“To get to play with one of my biggest influences and idols was a dream come true,” raves Fitz's Michael “Fitz” Fitzpatrick. “Daryl and the guys put it down and we all left it on the floor! We went pretty deep into the Daryl Hall catalog to sing the first song Daryl ever recorded. It was a day we will never forget!”

Live from Daryl's House made its broadcast debut on WGN America last year to impressive ratings, which spurred interest in syndication. The past four years have marked a steady stream of superlatives and recognition for Live from Daryl's House, with Hall receiving a Webby Award for Best Variety series at the 14th annual ceremony at N.Y.'s Cipriani Wall Street before garnering an O Music Award from MTV earlier this year. The shows have been edited into two 30-minute-long episodes which, in most cases, will air back-to-back.

Hopefully, the two shows teaming up the Philly Boyz (Daryl and Todd Rundgren) will be aired at some point.

And here's the cover of Daryl's new CD, which drops on Tuesday! 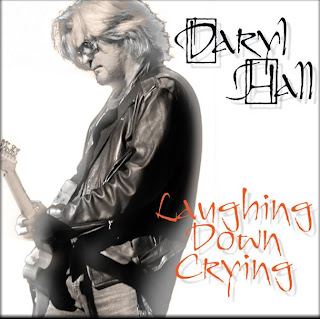