A SHOT OF WHISKEY 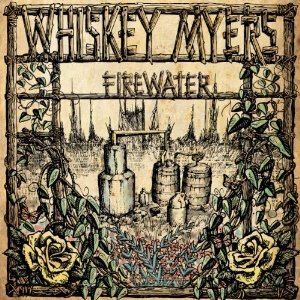 It's funny how what was once rock is now country. Bob Seger's last two chart singles? Country charts. Bon Jovi had a hit on the country charts. And pretty much everything that was southern rock in the heyday of the genre is now lost in the country section of a CD store…if you can even FIND a CD store.

All that said, there is still some good southern rock out there, and Whiskey Myers is poised to assume the Southern Rock crown once worn by such luminaries as The Allman Brothers and Lynyrd Skynyrd. Produced by ex-Shooter Jennings guitarist and songwriter Leroy Powell, Firewater is their sophomore album, and while the roots are distinctly Southern Rock, it also incorporates the band’s country and blues influences.

Whiskey Meyers has a rich incendiary sound that takes you back in time to the seventies, with an album full of southern-rock worthy songs meant to be played at full volume. The lyrics are fresh and in-your-face, and the sound is a no-holds-barred offering on the altar of Southern Rock.

Lead singer Cody Cannon has a voice that is carries the weight of experience beyond his years, reminiscent of Gregg Allman with a hint of Jon Bon Jovi and maybe a dash of Axl Rose. Lead and rhythm guitarists John Jeffers and Cody Tate trade roles during songs, demonstrating a twin guitar attack (augmented by Cannon on acoustic guitar). Drummer Jeff Hogg and bass player Gary Brown round out the rhythm section.

Firewater’s lead single, “Bar, Guitar and a Honky Tonk Crowd,” was released regionally in Texas and is currently approaching Top 20 status on the regional chart. The album's vibe is just plain soulful, and the band's sound, while a bit unpolished, showcases a diamond in the rough that will only get better as their catalog grows.

BALLAD OF A SOUTHERN MAN