OUT STANDING IN HIS FIELD 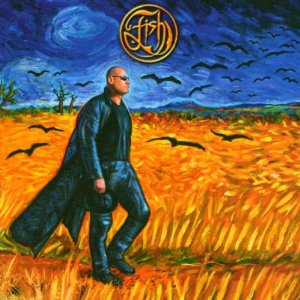 Poet, actor, singer, musician... Fish has not been content simply to milk his reputation from his days fronting Marillion, now more than two decades past. It is ironic that Steve Hogarth, who replaced him in his former band, is still referred to as the "new singer." The giant Scotsman left some large shoes to fill, but he has long since given up looking back.

Field of Crows was released in late 2004, and is certainly one of the most complete works Fish has produced as a solo artist. The album sees him merging traditional and progressive rock influences with Celtic leanings and a modern edge.

Working closely with former Big Country guitarist Bruce Watson, Fish delivers and album that manage to rock hard and embrace his Scottish roots, a rich and complex album with songs that scream 'epic' from start to finish. It's one of those albums that are impossible to adequately categorize, with blues influences and progressive elements all effortlessly woven into the melancholy mix.

The band are adept at their respective instruments and their seasoned experience comes through with startling clarity on these eleven new tracks. Joining Bruce Watson (guitars) is his fellow BC cohort Mark Brzezicki on drums, along with long time off and on members of Fish's bands of the past: Frank Usher (guitars), Steve Vantsis (bass) and Tony Turrell (keyboards). The music on "Field Of Crows" is tightly played and the pedigree of these performers shines through the entire operation.

Fish has one of the more unique and powerful voices in rock music, instantly recognizable, soft when it needs to be but managing to convey a sense of menace and edge when the song warrants it. Fish's voice may not be quite as strong as in past efforts, but it has taken on a mellow smoothness that works very well on this mature offering.

Fish's hand is evident in the production and songwriting at every level. Although I would not call this a concept album, there are certain themes that arise again and again (ambition talent and the gulf often between them; failure and fear of failure). Musically the album covers a wide array of styles, from rock anthems to tender ballads.

I think this album is a big step up from Fellini Days (its predecessor), and is as good as Sunsets On Empire.

Field Of Crows is highly recommended to anyone who misses the Fish of old, and for the uninitiated, if you simply want a good, solid rock album with a bit more thought in the grooves than usual, give it a try.