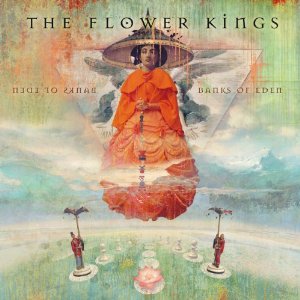 After a five year absence, progressive rock band The Flower Kings return with their latest opus, Banks Of Eden. Led by mastermind Roine Stolt (Transatlantic), the material has all the dreamy, melodic and cinematic elements that have become hallmakers on Flower Kings' records, but the latest incarnation of the band mixes it up with both psychedelic and darker metal passages that place this album somewhere in between the late 60's proto prog and the new generation of art rock.
With only five tracks, but one, the sprawling "Numbers," clocking in a twenty-five minutes, this effort should not leave fans of the band disappointed.
The instrumentation is what you'd expect, that is to say excellent. The guitars are soaring, the drums pounding but not overbearing, the vocals and harmonies lush and working together, with it all held together by a solid bass line.
Even with the addition of new drummer Lehrmann and the slightly broader set of influences, I do not know that the band really covers new ground, but the hiatus seems to have given the material a fresh sound and a renewed enthusiasm.
Listen for yourself! Let me know what you think...
PANDEMONIUM

FOR THE LOVE OF GOLD

FOR THOSE ABOUT TO DROWN