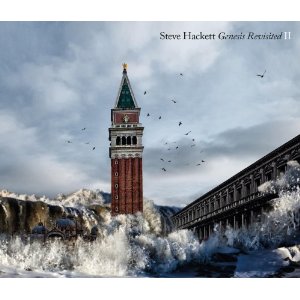 Ever since vocalist Peter Gabriel abandoned Genesis‘ classic line-up in 1975, the band’s ’70s purist fans have pined for a full-prog reunion. That dream appears to be unlikely in 2013, with Gabriel focused on his solo career and humanitarian efforts, and Collins announcing his retirement due to a debilitating spinal injury.


Hackett has always embraced the material from Genesis’ peak-prog period, faithfully playing the classic material on stage. While some critics feel Hackett is stuck in the past, he clearly still loves interpreting these songs, adding new textures and flourishes as the years go by.


The double-disc Genesis Revisited II is Hackett’s second collection of updated Genesis tunes, and it’s a far more cohesive and inventive set than the first volume released in 1996 (Watcher of the Skies).


Utilizing the same basic format as that album, Revisited II is almost entirely comprised of Genesis material, balanced out by a handful of solo Hackett tunes, most of which were originally rehearsed by Genesis in the ’70s.


As with any look back, it’s tough to know where to draw the line.


Somewhere between a note-for-note cover and a wide divergence from the source material lies the answer, and Hackett strikes a mostly successful balance.


Joininf forces with such prog-rock luminaries as Steven Wilson (Porcupine Tree), Conrad Keely (And You Will Know Us By The Trail Of Dead), and  Mikael Akerfeldt (Opeth) add to this collection’s appeal, and the material is never viewed through a nostalgic lens. Rather, the songs portray an an urgency most albums of this nature do not capture, with Hackett letting the songs go to some often strange new places.


Sometimes, the attempts miss the mark, but without taking a few gambles, the project wouldn’t feel so vital. Warts and all, Genesis Revisited II is what the die-hards have been waiting for.
THE MUSICAL BOX