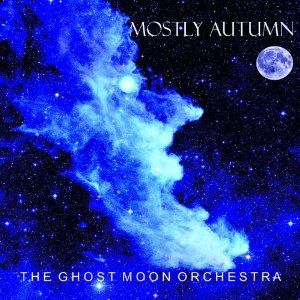 This prolific band from Yorkshire has built up a huge following over the years, surviving the departure of their eye- and earcatching vocalist and songwriter Heather Finlay by replacing her with the evenly eye- and earcatching Olivia Sparnenn (for most fans the best choice they could make bacuse she was already part of the band).

The Ghost Moon Orchestra, the band's 2012 album is already being hailed as one of the best albums Mostly Autumn has ever produced.

The album is good; the songwriting, performance and production are superb. Olivia Sparnenn's vocals reach new heights and we are treated to some of Bryan Josh's best guitar work to date.

Bryan Josh takes too many turns on lead vocals, and while he can sing, he will always stand in the shadow of Olivia or even Ann-Marie Helder (backing vocalist here, lead vocalist in Panic Room). The vocals in this band are better left to the ladies.

You know my obsession for a concept album, and this album has a unity to it thematically, lyrically and harmonically that makes it one cohesive and complete piece of work.

It is the music that makes the band, and the band's musical palette is diverse. The overall sound of the album does not capture the unique sound of Mostly Autumn, who built their name with flute and folk instruments accompanied by fierce guitar solos.

Keep in mind however, that this is a band that lost its frontwoman not too long ago, so the sound was bound to change. They draw on influences from the golden age of seventies' rock, buty have developed their own unique sound and style that is forward looking as well.

One of their best? Maybe not. Worth a listen? You betcha!

DROPS OF THE SUN (live)