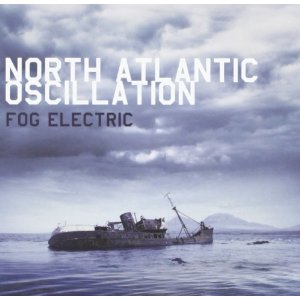 According to Wikipedia, the North Atlantic oscillation is a phenomenon involving fluctuations of atmospheric pressure at sea level.

What this has to do with the band North Atlantic Oscillation, I have no frigging idea!

It's prudent to listen to the Edinburgh, Scotland-based group's newest effort, Fog Electric, in the safe confines of a basement or bedroom to avoid any meteorological distress.

With headphones on, it is easy to imagine yourself floating in uncharted icy waters surrounded by thick fog and soothing mist. Headphones help the listener to fully grasp an album that does not lack in ambition and atmosphere, and almost reaches the heights it certainly aims for.

The result is a sound that captures the listener's attention, with simple, yet steady drum patterns, effective synths blended with post-rock inspired guitar that set the general tone for the album.

Throughout the disc, NAO do not stray too far from this formula, and the results are satisfying with some stand out tracks.  A couple of less rock-oriented, synth-dominant songs are well-structured but offer nothing unique, and fall a little flat. There are moments on the record that recall Porcupine Tree and Radiohead, proving that the band can take cues from their more popular contemporaries while still creating a sound that, while maybe not innovative, is still fresh.

An album that should be taken in as a whole, with a low-key pop atmosphere behind a thick cloud of haze, it makes for an enjoyable listen.