It Bites
IT BITES "MAP OF THE PAST" 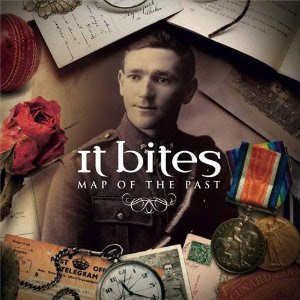 Officially launched in 1984, UK-based It Bites are still going strong in 2012, having been hailed
as everything from prog to pop to art rock over the course of their career (which enjoyed a "brief" hiatus between 1990 and 2006).

Their new outing, Map Of The Past, keeps the band's tradition diversity from album to album that has even their most devout fans guessing alive and kicking.

Map of the Past is the first concept album of the band's career, exploring the theme of the past as seen through old family photographs. A constant sense of nostalgia runs through the songs, providing the listener with (wait for it!) an audio map of the past. This is an album that needs to be listened to in its entirety, and takes several listens to "get."

It's unfortunate that in the United States, this album has flown completely under the radar. Like many bands who arrived in the second wave of prog (following Yes, Genesis, King Crimson et. al.), listening to their albums can be a game of "guess the influence."

Or you can slap on the headphones and simply let the music wash over you, slowly-building, keyboard-driven ballads that segue into guitar-driven, riff-happy stompers that lead into prorg epics with the "classic" It Bites sound and finish with a moody, atmospheric tracks with tasty guitar solos.
It Bites have delivered another masterpiece, best listened to from beginning to end, with music that is enjoyable, interesting and quite powerful on an emotional level.


MAN IN THE PHOTOGRAPH/WALLFLOWER (live)


MEADOW AND THE STREAM