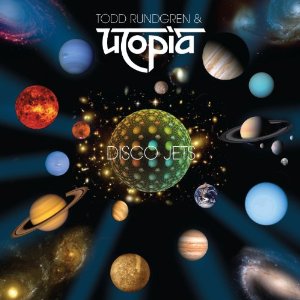 First thing-did you really think you would get through the whole A to Z endeavor on this blog and not see a mention of Todd Rundgren?
The Disco Jets sessions took place at Bearsville studios shortly after the release of Todd's Faithful album and was a purely instrumental affair recorded "tongue in cheek" with sights firmly set upon the current trends of the time such as the U.S. bicentennial celebrations, Disco music, Science Fiction movies such as Star Wars and the CB Radio fad.
Featuring Rundgren and the then-current lineup of his band, Utopia, featuring Roger Powell, Willie Wilcox and John Siegler, the album featuried some memorable soloing from Rundgren and Powell, the impressive 'Space War' and the memorable cover of the "Star Trek" theme.
As you might imagine, the record label did not see this as a marketable product, and the Disco Jets project would languish in the vaults for several decades before appearing as part of a Japanese onlycompilation, now long deleted.
Good news for Rundgren fanatics-Esoteric Records released a digitally remastered edition of this "lost" 1976 album as part of it's Rundgren remaster efforts. For the die-hards, this is a must-have.
The album would have been critically trashed if it had been released between Faithful and Ra, but after twenty years since the last Utopie release, it's musical mannah and a welcome official addition to Todd's catalog. The mastering sounds great, the songs are quick instrumentals, all nicely packaged with some interesting liner notes.
While this is more of a novelty record, the tunes are musically hilarious, and being Todd and Utopia, there some great Todd solos, as well as tastes of the prior Utopia albums. This CD shows what happens when musical genius has some fun.

For the casual fan? I don't think that would be a good idea...