IT'S BEEN COVERED BEFORE

Review originally posted on http://www.myspace.com/disc_connected on 11/22/2007 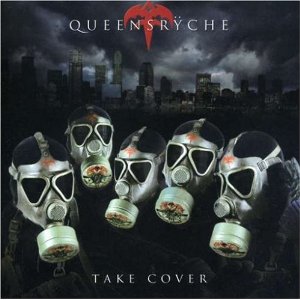 How I feel about covers albums has been well-documented. The alarming trend continues, as Queensryche becomes the latest band to "pay tribute to their influences" (or as I prefer to believe, release an album without writing a goddamn thing).


In the decade since guitarist Chris DeGarmo departed Queensryche, the band has been lacking in direction and execution, their albums suffering from inconsistent songwriting. Even a desperate effort to regain their past success, a sequel to their '80s metal masterpiece Operation: Mindcrime (the cleverly titled Operation: Mindcrime II) has not returned them to their DeGarmo heights. Even in spite of my feelings about covers albums, my trepidation at the prospect of Take Cover can certainly be understood.

Overall, this is a varied collection of songs with many tracks that will surprise Queensryche's fans. Opening the album is "Welcome to the Machine" by Pink Floyd, by far the best track on the disc. Black Sabbath's "Neon Knights" is another gem. Some of the tracks on the album must have seemed better on paper than they sound here (the worst being "For What It's Worth" by Buffalo Springfield), although I do have to give the band credit for trying on some different sounds. The vocals and production on this effort seem rushed. It's a novelty and with the exception of Floyd's "Welcome to the Machine" and Sabbath's "Neon Knights" it contains no material that will beg you to play it again. Recommended for die-hards, but casual fans will want to preview the tracks before buying.