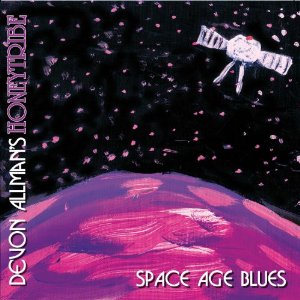 Honeytribe was formed by Devon Allman (son of Gregg Allman of the Allman Brothers Band) in 1999, although they took a hiatus, reforming in 2005, and releasing their debut album in 2006. Today, we're here to talk about the follow-up to that favorably-reviewed debut, "Space Age Blues," released in October, 2010, and featuring a guest appearance by Huey Lewis on harmonica in addition to the power-trio of Devon Allman, George Potsos and Gabriel Strange.


'Science fiction blues' isn't a genre you'll find in an illustrated history of rock and roll, and the songs here are not 'Space Age' but a collection of rocking blues songs, with perhaps the weak track being a cover of Stevie Wonder's "Sir Duke." Honeytribe's sophomore effort is a musical thrill ride, carefully constructed and full of exploding guitar licks and lush beds of strings in a musical stir fry of classic rock with a side of soul and a modern psychedelia chaser. Allman does not disappoint-no attempt to emulate his legendary uncle Duane by playing any slide, he seems to focus on his songwriting and vocals, occasionally letting loose on some short guitar solos. Some of these songs are outstanding, most others are pretty good, with the aforementioned weak link. Overall, it's a success, and I recommend it for blues-rock fans!