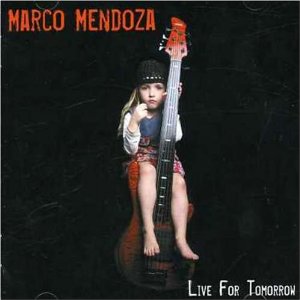 If I were to recommend that you run out and pick up "Live For Tomorrow," the debut solo CD from Marco Mendoza, you'd probably say, "who?" and rightly so. It is a Frontiers Records release, and these gents have a pretty good track record spotting and signing AOR talent.


Mendoza certainly has some AOR credentials, having played in Blue Murder and Soul SirkUS, and having toured with Ted Nugent, Whitesnake and Thin Lizzy. And suppose I were to say that this disc was produced by guitar slinger Richie Kotzen, who shares many of the writing credits? Would you give it a listen?

Fans of Kotzen's work should like this disc, Guest stars include Doug Aldrich, Ted Nugent and Steve Lukather. Musically the record offers a down-to-earth sound mixing elements of classic rock with blues and melodic rock. I hear hints of Mr Big and Damn Yankees, and Richie Kotzen handles the bulk of the guitar work and duets on vocals with Marco on "I Want You".