A WIZARD GETS THE TRUE STAR TREATMENT 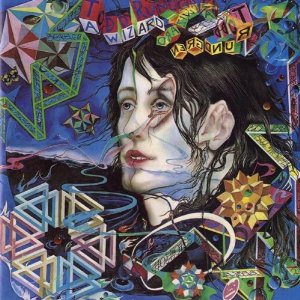 Todd Rundgren is one of music’s most enduring iconoclasts. Not merely content to rest on his early career laurels as a purveyor of top-tier AM pop (“Hello, It’s Me,” “I Saw the Light”) the restless musician has followed his muse from one direction to another over 40+-years, taking in soul (of the Philadelphia and blue-eyed varieties), pop, prog rock, jazz, funk, arena rock, avant-garde experimentalism, a cappella, musical comedy and even operetta!

And that’s just naming a few of the styles Todd Rundgren has mastered as an artist.

As a producer, he’s helmed some efforts for Daryl Hall and John Oates, Badfinger, The Band, The Tubes and XTC, not to mention a little album named Bat Out of Hell for the oversized talent of Meat Loaf.

Last week, he released the follow-up to last year’s Todd Rundgren’s Johnson (which notwithstanding the um, unfortunate title, is a ferocious collection of hellraising blues from the pen of Robert Johnson!) with another new LP, [Re]Production.

This one reinterprets classic songs produced by Rundgren (including “Two Out of Three Ain’t Bad” and “Dancing Barefoot”) in a slick, electronic modern dance setting. Yes, it’s safe to say that one can always expect the unexpected from Todd Rundgren.


But for the full picture of the eccentric genius of Todd, you’ll want to delve into Edsel’s recently-announced series of expanded reissues of Rundgren’s Bearsville Records catalogue.

An arm of the Demon Music Group, Edsel recently announced its acquisition of rights to reissue the Bearsville library, kicking the series off with Norma Jean Wright’s CHIC-produced debut.

Five 2-CD sets of Rundgren material are coming on October 3 in the United Kingdom, covering a total of nine essential albums (the 1972 classic Something/Anything is a double-disc album) including a duo of albums from Utopia.

Almost all contain rare and unreleased bonus tracks, making these the definitive reissues for this storied catalogue. From 1970’s debut Runt to 1977’s Utopia LPs RA and Oops, Wrong Planet!, these albums truly represent the crème of the Rundgren crop. 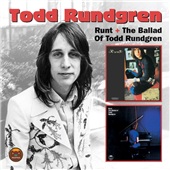 After learning the ropes as part of the Philadelphia rock group Nazz, Rundgren spread his wings as a solo artist in 1970 at the age of 23. Runt introduced the irresistible if sometimes misunderstood hit single “We Gotta Get You A Woman,” which epitomized the pop/soul sound of the LP. Still, Runt wasn’t without its experimentation, pointing the way towards the future, like the nine-minute rock opus “Birthday Carol” and the haunting, wordless exercise in harmony vocals, “There Are No Words.” Fresh from The Band’s Stage Fright, Levon Helm and Rick Danko joined Rundgren for “Once Burned.” Edsel’s reissue appends the entire November 1970 mispressing of the album for the first time ever on CD, including alternate takes, different mixes and two exclusive songs, “Say No More” and “Baby Let’s Swing (Complete Version).”

1971’s Runt: The Ballad of Todd Rundgren furthered the Runt persona and honed the Laura Nyro-style songcraft of the debut album. In addition to the single “Long, Flowing Robe,” Ballad introduced more lush ballads like “Be Nice to Me” and “A Long Time, A Long Way to Go.” Edsel’s edition adds four live radio broadcast bonus tracks.

As good as these first two LPs were, the third time was really the charm. 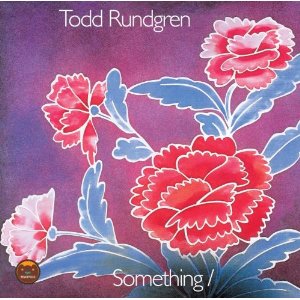 1972’s Something/Anything was, and is, unlike any other album in the rock canon. The multi-hyphenate artist recorded three of the album’s four sides himself, playing all instruments and singing all vocal parts. The fourth side was a kind of mock autobiographical operetta, aided by a rock ensemble.

Something/Anything would have been an instant classic if only for its two hit singles, the Carole King-inspired “I Saw the Light” and the remake of the Nazz track “Hello, It’s Me,” with a new, more upbeat sound. But those were just the tip of the iceberg. The impossibly lush ballad “It Wouldn’t Have Made Any Difference” rests comfortably alongside the heavy metal anthem “Black Maria,” while “Cold Morning Light,” “Couldn’t I Just Tell You” and “It Takes Two to Tango” show off the singer/songwriter’s effortless mastery of the pop song form. 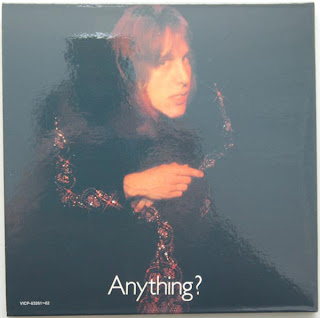 Comic relief was also in abundance, with “I Went to the Mirror,” “Piss Aaron” and Gilbert and Sullivan-style “Song of the Viking.” A truly original voice had announced itself. Edsel’s reissue is bolstered by the inclusion of a demo of “It Wouldn’t Have Made Any Difference” plus six radio spots for the original album. 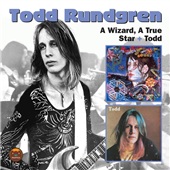 Rundgren’s follow-up was eagerly awaited. Like clockwork, it arrived one year later. But nobody could have predicted the modestly-titled A Wizard, A True Star? Rundgren responded to his commercial breakthrough by creating an album so singular that few knew what to make of it.

At a lengthy 56 minutes for a single LP, AWATS was a psychedelic aural stew of electronica, metal, jazz, pop, soul and showtunes. Patti Smith wrote in Creem, “Blasphemy even the gods smile on. Rock and roll for the skull. A very noble concept. Past present and tomorrow in one glance. Understanding through musical sensation. Todd Rundgren is preparing us for a generation of frenzied children who will dream in animation.” So “Never, Never Land” from the stage musical Peter Pan is joined by a soul medley of Thom Bell, Smokey Robinson and Curtis Mayfield oldies, and bona fide Rundgren classics “Just One Victory” and “Sometimes I Don’t Know What to Feel.” If the audience didn’t know what to feel, either, Todd seemingly didn’t care. In “Just Another Onionhead,” he opined, “You want the obvious/You’ll get the obvious” before launching into anything but.

1974’s Todd took the avant garde approach a bit further, with more synthesizer/electronic journeys plus the ravishing pop of “A Dream Goes On Forever,” humorous commentary “An Elpee’s Worth of Toons,” hard-rocking “Heavy Metal Kids” and another theatrical showstopper, Gilbert and Sullivan’s “Lord Chancellor’s Nightmare Song” from Iolanthe. Edsel has added live performances of “Ooh Baby Baby,” “A Dream Goes On Forever” and The Move/ELO’s “Do Ya” to these already-packed albums. 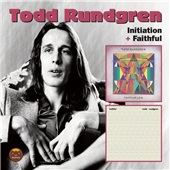 The 56 minutes of AWATS weren’t enough for the wizard himself, so with 1975’s Initiation, he delivered the longest-ever single LP at 68 minutes’ length. Side One led off with the Philly-influenced “Real Man” and took in the jazzy title track with sax solo by David Sanborn, as well as “Fair Warning” with guests Edgar Winter, Rick Derringer and Dan Hartman. Side Two, though, broke all of the rules with the unorthodox 36-minute single track, “A Treatise on Cosmic Fire.” The treatise welcomed future Utopia keyboardist Roger Powell into the fold, and found Rundgren taking his skill at the synthesizer a giant, progressive-rock step forward.

1976’s Faithful was perhaps the most ambitious project of Rundgren’s career to date, in which he note-for-note reproduced songs from some of the most individual artists in rock history: The Beatles (“Rain”), The Beach Boys (“Good Vibrations”), Jimi Hendrix (“If Six Was Nine”) and Bob Dylan (“Most Likely You Go Your Way and I’ll Go Mine”). The second side was a triumphant return to straight-ahead pop songwriting, with remarkable songs that remain concert staples today like “Cliché” and “Love of the Common Man.” These two very different LPs have been expanded with one bonus track, a 1975 live recording of the Who-influenced Nazz nugget “Open My Eyes.” 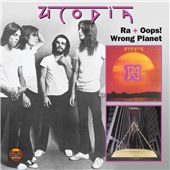 Finally, Edsel brings together the third and fourth albums from Utopia, the rock band formed by Rundgren in 1974 as a complement to his solo career. (The label promises that the first two albums from the band will arrive in a later wave in the Rundgren reissue series.)

The former was full-tilt prog rock, with its centerpiece the 18-minute “Singring and the Glass Guitar.” RA remains Rundgren’s highest-charting UK album.

Its follow-up nine months later was a wholly different work of twelve short songs, though the genre lines were, as usual, blurred. Its lasting contribution to the Rundgren oeuvre is the life- and love-affirming “Love is the Answer,” which England Dan and John Ford Coley took to the U.S. Top 10 in 1979. No bonus tracks have been added to these two albums.

All of Edsel’s reissues feature liner notes by Paul Myers, adapted from his definitive Rundgren chronicle, A Wizard, A True Star: Todd Rundgren in the Studio. Lyrics and rare photos are also promised for each title.

The first salvo in the Todd Rundgren reissue campaign hits stores in the U.K. on October 3 (Amazon has 'em available for preorder).

Edsel’s series is simultaneous with a program from the Cherry Red arm Esoteric Recordings. Reissues of Rundgren’s late-period albums The Individualist and No World Order are due from Esoteric on October 31. Future releases will round up the remainder of the artist’s Bearsville output.

All of these releases epitomize the singer’s credo, as he wrote in Bearsville promotional materials circa 1981:

“I’m not looking to be in any one place for too long. A lot of people’s whole idea of making records is to arrive at an acceptable style and exploit it until the crows come home. I’ve been more intrigued with finding out what I can do.”

If you’ve missed out in the past, here’s your chance to find out, too. 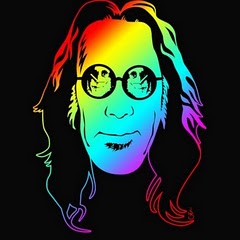 
Another article can be found HERE.