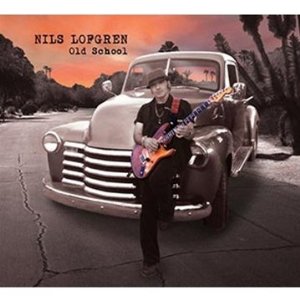 Nils Lofgren, best known these days as a 27-year member of Bruce Springsteen’s E Street Band, delivers a contemplative record after a difficult period in that band's history, in the wake of losing both E Street saxophonist Clarence Clemons (who passed in June at age 69 from complications following a stroke) and organist/keyboard player Danny Federici (after a battle with cancer in 2008).

As a result, Old School opens with the title track, a bold rock ‘n’ roll kiss off to whiners, featuring a guest vocal turn by Lou Gramm of Foreigner fame (who knows a little about dealing with adversity after his battle with cancer).

Lofgren proceeds to deliver white knuckled riffs and rockabilly songs that would not be out of place on one of his employer's albums, with another guest vocal from Free/Bad Company vocalist Paul Rodgers.

Lofgren's quiet tribute to Ray Charles ("Miss You Ray"), has the same emotional tone as Springsteen’s "Blood Brothers," and could easily be about the recently departed Clemons. Old School finds Lofgren sharing his journey through grief and anger with us.

Old School is Nils Lofgren’s first studio album since 2008′s The Loner: Nils Sings Neil. Anyone who’s followed Lofgren’s career know about his diverse solo offerings as well as his other sideman stints, which include spots with Neil Young, Willie Nelson and Ringo Starr. Those influences shine on this record, which brings out his diverse best. His debut still shines as the brightest gem in his catalog, but this one is an addition you should consider adding to your collection.

E STREET BAND ALERT! As I type these words, there has been a small mention in the pages of Rolling Stone of an album and tour next year from Nils' other job...