Today, I am really bummed.

Regular readers will remember Chickenfoot, the cat named after the band formed by Sammy Hagar and friends a couple of years ago.

I had to have him put down today. 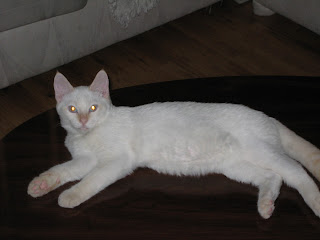 Christmas night, he was his normal pain-in-the-ass self, chasing the older cats around the house and getting into things I would prefer he not get into.

Monday morning he seemed a little out of it, but nothing that concerned me.

This morning (Tuesday), I came out to feed them and he seemed to be having an epileptic fit. I ran him into the vet, and they spent all day with blood tests and fluids and oxegen and medications that are supposed to relieve pressure in the brain, and at 3pm they still did not know what was wrong. They said they could transfer him to some sort of specialty animal hospital, but did not think there was much optimism.

So I made the call. Watched as the needle plugged into the IV line and as his little heart slowed, and then stopped. 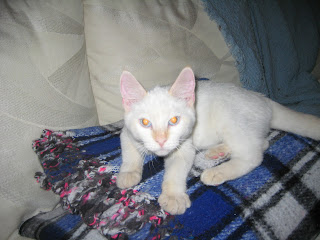 I'd gotten Foot (one of his nicknames I can actually print) because another cat was older (ten) and had been diagnosed with a heart murmur. She outlived him, and that was with him chasing her around the house every day.

Of course tonight I've been second guessing not taking him in yesterday, and wishing I'd not yelled at him so much for getting on the counters and other assorted infractions that do not seem so important tonight.

But I think he had a pretty good, if short, life.

He certainly demonstrated a whole lot of attitude.

And I'm gonna miss him. 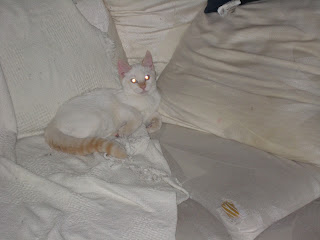