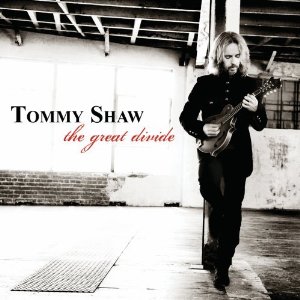 Montgomery, Alabama is a few hundred miles from Nashville (and Skynyrd says it's a real sweet home), but it took Tommy Shaw thirty-six years to get to Music City, taking a three-and-a-half-decade detour through Chicago (and the world) as a rock icon, singer and guitarist in Styx and Damn Yankees.


Tommy's early love of roots music always burned bright, and his remarkable path of musical discovery and storytelling has led him back to those roots on his newest solo effort, The Great Divide.

Working with some of the finest bluegrass session players around, and with guest appearances by Dwight Yoakam, Alison Krauss and Brad Davis, Shaw’s bluegrass debut is a down-home country album that is quite reminiscent of the Shaw-Blades debut.

Tommy does not stray far from his natural voice (no 'put-on' southern twang drenched in nasal tones) but he is in fine voice here. Shaw manages to capture a bit of the high lonesome sound at times, and the Alabama boy delivers a roots album that deftly blends traditional bluegrass sound and modern songwriting. Shaw’s writing is sharp with a light feel that suits the material. Several of these songs would not be out of place on a Shaw-Blades album, built around traditional instrumentation and rootsy arrangements.

All in all, a surprising and pleasing turn from Shaw, and one fine bluegrass album.

BACK IN YOUR KITCHEN