It's not Todd Rundgren, but an incredible simulation.

Veteran rocker Todd Rundgren is planning to launch his own tribute band so he can retire from touring after almost 45 years on the road.

The songwriter/producer began his career with Nazz in 1967 before going solo two years later.

He is still regularly touring and recording at the age of 63, but admits the rigours of life on the road are wearing him down - and he's considering finding an impersonator to take his place at concerts. 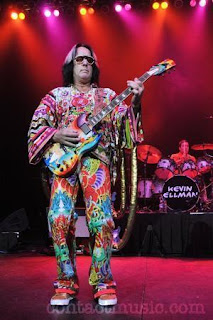 Rundgren tells Mojo magazine, "I'm 63 years old and there's a limit to what I can do physically. So I'm thinking ahead: how can I alter what I do in order to accommodate that without compromising any of it?

"The hardest part of it now is the travelling - it's getting to the gig. So I'm thinking about starting my own tribute bands. They can go out to work."

Now there have been other bands with successful tribute bands, but they tend to be acts that sell quite a few more concert tickets than Todd.

The Australian Pink Floyd Show has been touring the globe for years putting on shows that are quite good (I saw their Wall and DSTOM shows and was pretty impressed).

Brian May has been interviewed as looking to form an authorized tribute band for Queen some twenty years after Freddie Mercury's death.

A few months ago, I guest-posted on Tossing It Out  and the topic was ghost writers-keeping an author's fiction series alive after the author's death.

This looks to be the musical equivalent of that phenomena.

So maybe it won't be long before I curl up with a Spenser tribute novel while listening to a Todd tribute band.

But I'll be wearing an Australian Pink Floyd tee shirt!

For books I was on the fence-for music there is no question in my mind. When the musician has had enough, it should end.


Todd-when you retire, I'm going to be sad.

But you weren't exactly setting sales records - what makes you think a tribute band would do any better?

My idea? Don't travel. Continue to write and record, and do some local shows each year.

Let the fans come to you.

Heck, you live in Hawaii.

You had fans building vacations around Akron, Ohio. They'd probably be willing to vacation in Hawaii.