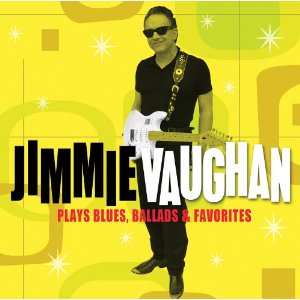 Jimmie Vaughan founded the iconic Fabulous Thunderbirds in 1974, and they became famous for the high-octane blues-rock sound that earned them critical acclaim in the '70s and platinum-selling albums in the '80s. In 1990, Vaughan recorded a duets album, Family Style, with his brother shortly before the latter's untimely death, and then went on to launch a solo career.

Blues, Ballads and Favorites is Vaughan's tribute to the music that inspired him, with covers of songs by Little Richard, Jimmy Reed, Roy Milton, Roscoe Gordon and others.

Recorded in Austin, Texas, and featuring guest appearances by Lou Ann Barton and Bill Willis, Blues, Ballads and Favorites is an enjoyable excursion into some well chosen covers and standards topped up by a typically tasteful JV instrumental.


This album has a little of everything, as the title might suggest. Vaughan's guitar playing is expressive and clear with a fairly contemporary sound.
And good news...the follow-up is already in stores!