TOM WAITS: BAD AS ME 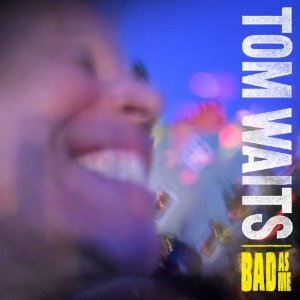 I have been saying for close to three decades that Tom Waits has not put out much worth listening to since 1980’s Heartattack & Vine, but a couple of years ago I came to acknowledge that the decline happened after Waits’ next effort, the One From The Heart soundtrack in 1982.

Since then, some of Waits' output has been BAD.

With this year’s Bad As Me, Waits puts something on record he has not done much of late…melodies!

You can actually hum along to most of the tunes on this record! And this is an album that is definitely worth listening to!

While many of the pieces (like the title track) still feature the unusual arrangements that have made Waits a college radio favorite, his voice is in pretty good form (meaning you can understand the lyrics), and the songs are quite listenable.

There’s one number that shows Tom getting his Elvis on (“Get Lost”), as well as the balladry that Waits served up like no one else in his Asylum years (“Back In The Crowd”, “Last Leaf”) and the imagery that Waits can infuse into a lyric that puts you right beside him in the story (“Face To The Highway”).

I’ve kept up with the Waits catalog over the years but this is the first title since the early eighties that I would actually recommend. Welcome back, Tom-where’ve ya been?


FACE TO THE HIGHWAY