H IS FOR ROBERT HAZARD “TROUBADOR” 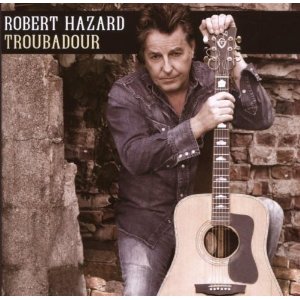 I remember growing up in the Philly suburbs when Robert Hazard was going to be the next big thing.

Robert Hazard and The Heroes ruled the Philadelphia airwaves in the early 80's and "Escalaotr Of Life" was a huge hit. The guitar player for the Heroes lived around the corner from my brother and me, and he may be the only guitarist in history who narrowly missed rock stardom with multiple bands but went on to become a doctor. So I guess it all evens out, right?


The first proper album failed to follow suit, and Robert was dropped.

But, like his former guitar player, Robert was lucky.

Robert lent a song he had written (in fifteen minutes-in a bathtub-on an acoustic guitar) to a (then) little known New Yorker with bright orange hair, and the rest is history.

The song, "Girls Just Want To Have Fun," became a pop staple. It's the song that will, undoubtedly, always define Hazard's career.

Don't let Hazard's past color your expectations of Troubadour, a collection of weatherbeaten Americana exuding back-porch charm that takes Hazard further into his singer/songwriter soul, first explored on 1998's Howl.

The songwriting recalls the poetry of Springsteen, with tales of love lost and loneliness delivered in aching, acoustic folk ballads, with slow-burning, electric rockers thrown in for good measure. All are enveloped in the warm melodies and sure hooks that are the hallmarks of first-rate songwriting.

Sadly, Robert passed away on August 5, 2008, shortly after the release of this album.
Rest in peace, Robert!

I Still Believe In You