It's actually pure coincidence that this makes reviews of three live albums in a row. Really! But we're back to the not-so-mainstream with this one, as I doubt many of you have ever heard of this band. 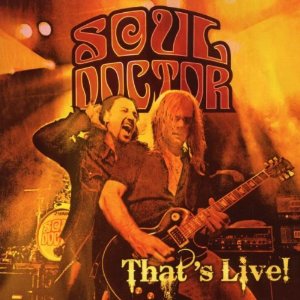 Taking their name from a Foreigner song, the band was formed after the breakup of Fair Warning when singer Tommy Heart and guitarist Chris Lyne  found themselves wirting some new material for a project that would evolve into Soul Doctor, with a unique sound that perfectly reflects Heart’s and Lyne’s collective influences such as Led Zeppelin, Thin Lizzy and Bad Company.

After four successful and highly acclaimed releases, the time was right for a live album. This set features a total of 13 tracks that were recorded between 2005 and 2007.


Usually I think that live albums recorded at a single show come off a little better, but this approach allowed the band members to choose the best performances for each song, and the albums flows together rather well. "That's Live" includes versions of the best songs from their four studio albums.

Check out the limited edition that includes a bonus disc with 4 tracks from the archives, including alternate mixes and acoustic versions.