F IS ALSO FOR TODD IN THE FRONT ROW 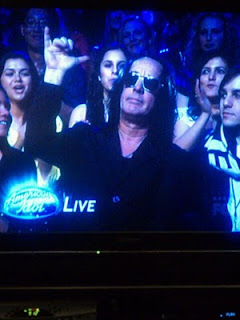 When Alex Cavanaugh told me that Todd Rundgren was in the front row on American Idol, I didn't know what it meant, having never seen the show.

It turns out, he meant exactly what he said. There's Todd, sitting in the front row.

Todd is scheduled to appear as a guest producer in the near future.

I loathe the idea of American Idol, but I'm a Rundgren fanatic.

The US version of  Todd Rundgren's Johnson is scheduled for June 7.

And watch for Todd on American Idol on April 13.