T IS FOR TESLA “REAL TO REEL” 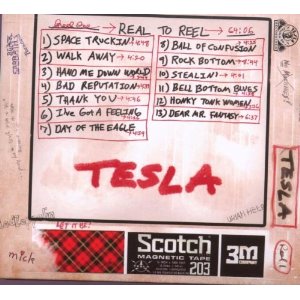 Tesla said "Thank You" to their fans and their Rock and Roll heroes with the release of "Real To Reel," their 6th new album of studio recordings. The first 13 tracks REAL TO REEL-"Reel 1" were made available at retail outlets, while the second disc-"Reel 2," containing the remaining 12 songs were (for a limited time) only available along the band's tour route with the purchase of a concert ticket. Reel 1's packaging was designed to house the second disc. Since that summer tour, volume 2 has been released to retail.

Are you confused yet? Onto the music! There has been a trend among aging rock bands to release covers albums. Maybe they all saw how rich Rod Stewart was getting, or maybe they just don't write music anymore, but when rock poet Patti Smith is issuing a covers album, something's up.

TESLA first tested out some of their favorite rock classics with their fans in the summer of 2006 during the "Electric Summer Jam" tour (the first tour with guitarist Dave Rude, who replaced original guitarist Tommy Skeoch). While UFO's "Rock Bottom" went down like a storm to a standing, cheering, grandstand crowd of 10,000 in Milwaukee, Black Sabbath's "War Pigs" engaged 6,000 people in Lansing, Michigan so much that they refused to leave during a torrential rainstorm which lasted throughout the entire two-hour show. After getting such a positive reaction from their fans, the band went into the studio to record REAL TO REEL.

Now if you read my blog regularly, you already know I am not a huge fan of covers albums. Add to that the cardinal sin of covering a Peter Frampton song (it just does not work) and you may think I hate this album. But somewhere between their in-store appearance and concert in Phoenix back in June and repeated listenings, Tesla won me over. This is one darn fine rocking album, and the band does their influences proud. Although I still think no one should ever cover anything that came off of Frampton Comes Alive (just on principle).

Tesla does a good job of adding their style to these classics of yesteryear, and any fan of the band will like this album.
Before I saw an in-store performance at Best Buy in north Phoenix, all I really knew of Tesla was their live cover of "Signs" from a decade earlier. The in-store performance was so energized, I bought a ticket to their concert a week or so later. After that show, I was a convert.

If the band comes to your town, by all means go! These guys know how to rock the house!

Watch video for Thank You