This one's for you, Alex! 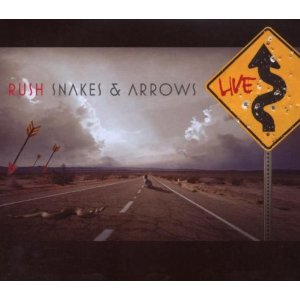 Somehow, Rush manages to defy the marketplace trend. In a retail music world where physical sales are diminishing, and rock sales are shrinking, Rush pulls their trick of following up a studio release with yet another live album. As usual, it moved a respectable number of units.


Recorded in Rotterdam over two nights in October of 2007, this release spreads 27 tracks over two discs, with nine tracks from 2007's Snakes & Arrows (I love it when a band tours their new album instead of playing a greatest hits set). That doesn't mean that Rush ignores their staples-the classics are represented here as well.

Geddy Lee's voice has mellowed with age, and all three members are masters of their respective instruments. In fact, after seeing a Peart drum solo live, you really don't need to waste your time watching other drummers do their "bash the skins" solo. Neil kind of ruins all other drummers for you.

If you saw the tour, this makes quite a nice souvenir. If you didn't, here's what you missed-and you'll get another chance, as they're back on the road this year.

For Record Store Day 2011, Rush released a limited edition white vinyl 45 from their forthcoming album (Caravan b/w BU2B, digitally released last year). I got my copy-did you get yours?