In the interests of full disclosure, many of these are reviews that were previously posted on my blog on My Space, and while they are new posts to this blog, and new to most of you, they are not new work on my part, except for going and retrieving them from My Space and gathering cover images and alphabetizing them. And adding sound bytes. I guess that’s work. 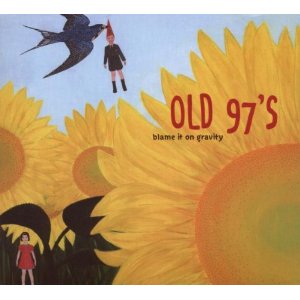 O  IS FOR OLD 97’S “BLAME IT ON GRAVITY”
The Texas cult band, possibly best known for their appearance in 2006's "The Break Up," are back with their first studio set in four years.


This one kicks into gear rocking, with a mixed bag of pop rock along the lines of Big Star and later Replacements, and alt-country and Americana flavored tunes.

After nearly twenty years in the business, this band is still lingering on cult status, but this album does not disappoint, mixing up rave-up rockers, lonesome wail western tunes, and Rhett's own brand of Bowie-esque alt-country-pop.

Rhett and Murray seem to be healthily grounded in thoughts about ladies and mortality in equal measure, but never to the point of taking themselves too seriously to poke fun at just about everything under the sun, even their beloved native city of Dallas. Definitely worth a listen.

Listen to Dance With Me