U IS FOR UTOPIA “RA” 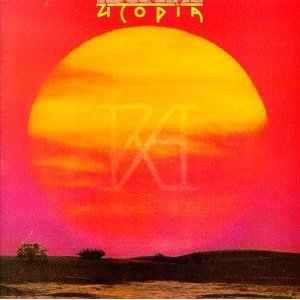 Didja really think you'd make it out of April and through 26 posts without a Todd Rundgren album review? Oh ye of little faith...

Ra was my introduction to Todd Rundgren’s music, played in tenth grade English class by TBW, a teacher who had a major impact on my life. Just introducing me to TR qualifies as a major impact, but there are other pieces of wisdom I learned from him that I still remember and am grateful for.


Offered as an example of a non-traditional short story, TBW played the cut “Singring And The Glass Guitar,” an eighteen minute epic that signaled the last piece of progressive music from the new lineup that had been stripped back from the earlier two albums.

The huge, electric "orchestra" present on the debut had been reduced to a four-piece comprised of Roger Powell (synthesizers, piano, organ, and vocals); Todd Rundgren (electric and acoustic guitars); Kasim Sulton (electric bass guitar and vocals); and John "Willie" Wilcox (drums percussion, and vocals). This lineup would endure for almost a decade, releasing eight more albums before calling it quits.

Todd Rundgren is very creative here, creating hypnotic synthesizer and guitar interplayby trading licks with Roger Powell. The four-part vocal harmonies that would become Utopia’s signature abound, and each band member is showcased both as lead vocalist on at least one track as well as on “Singring.”

The bottom line- RA is a great album, a perfect mix of pop (Eternal Love), rockers (Hiroshima), prog rockers (Communion With The Sun) and an epic prog-rock fairy tale (Singring). Perfect for proggers and fans of Todd more mainstream music, if you can only buy one Utopia CD, this is the one.

It's even one of Neal Morse's (ex-Spock's Beard, Transatlantic, new solo album next month) top five albums of all time! Don't believe me? Check out the liner notes on "V."